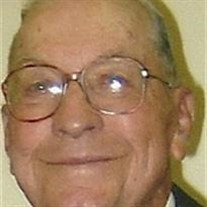 Funeral services for J.P. Sides, age 91, of Henderson will be held Saturday December 11, 2010 at 11:00am at the Rader Funeral Home Chapel with Dr. Ray Brooks and Rev. Steve Butler officiating. A private family burial will be held Saturday afternoon at Rocky Springs Missionary Baptist Church Cemetery in Dialville. Mr. Sides passed away Saturday December 4, 2010 in a Tyler Hospital. Visitation will be from 5pm ~ 7pm Friday and from 10am ~ 11am Saturday Mr. Sides was born April 23, 1919 to Pearl Elijah and Johnnie Sides. He married his Dialville High School sweetheart Mary Alice Harris on February 13, 1944 at the First Baptist Church in Jacksonville. She preceded him in death after 66 years of marriage. He was also preceded in death by his parents and sister Doris Jones of Dialville During World War II Mr. Sides was a pilot in the Army Air Corp, and served in the European Theater. He was awarded the Air Medal and the Distinguished Flying Cross medal for his outstanding service. Mr. Sides was general contractor in Henderson for over 60 years. His work can be seen all over East Texas. Some of his work includes Herschels, The Chamber of Commerce, Henderson?s First Baptist Church, Calvary Baptist Church, and Texas Baptist Institute. He was an active member of Calvary Baptist Church and served as a trustee of Texas Baptist Institute for over 40 years.. Survivors include his three children and their spouses: Steve and Linda Sides of Hallsville, Karen and Jim Grunert of Cleburne, and Shaefer and Amy Sides of Lorena. His seven grandchildren are Lisa Sides Tabor and husband Josh, Jaimie Grunert Moss and husband Steve: Jonathan Grunert, Justin Grunert, Sarah Sides, Mary Sides, and Samantha Collins. He has two great grandchildren, Anna and Julian Tabor. Mr. Sides is also survived eight nieces and nephews and their families, as well as many lifelong friends. The family would like to thank Earnestine Jordan for her loving friendship and over the past few years. Heartfelt thanks also go to the staff at Autumn Leaves Rehab and Nursing Home, and to the staff at ETMC in Henderson and Tyler for their help in recent days. Memorials may be made to Texas Baptist Institute and Seminary, Attn. Robert Wallace, P.O. Box 570 Henderson, Texas 75653.

The family of J. P. Sides created this Life Tributes page to make it easy to share your memories.

Funeral services for J.P. Sides, age 91, of Henderson will be...

Send flowers to the Sides family.