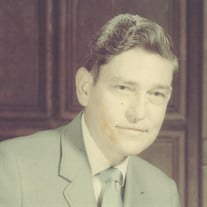 Henry Covington McGrede Henry Covington McGrede, age 93, passed away on Thursday, April 9, 2015, following a brief illness. A memorial service will be held at 2:00 p.m., Tuesday, April 14, 2015, in the sanctuary of First United Methodist Church, with Dr. Roy James officiating under the direction of Rader Funeral Home. Henry was born February 16, 1922, in Longview, Texas, to the late Novie Bell and Henry Covington McGrede. He moved to Sulphur Springs, Texas, in 1925, when his father purchased half interest in the Sulphur Springs Coca-Cola Bottling Company. Several years later, the McGrede family entered into a partnership with the Charles Ashcroft family forming a relationship that lasted decades. Henry had many fond memories of growing up in Sulphur Springs, including working at the Coca-Cola Bottling Plant, milking cows and tending chickens. While in high school he learned to play the trombone, and when asked why this particular instrument, he replied, “It was the only one that was free.” Following graduation from high school there, Henry completed his pre-medical studies at Vanderbilt University, Nashville, Tennessee, where he lettered playing the trombone in the marching band. He continued to wear his letter sweater until his last days. Henry’s mind was both inquisitive and scientific. He always wanted to understand exactly how everything worked. If he had not become a physician, being an engineer was next on his list. His greatest fascination was the miracle of the human body. He attended his first year of medical school at Baylor School of Medicine in Houston. Prior to his second year of medical school, his class was given the choice of remaining at Baylor or transferring to Southwestern Medical School in Dallas to become a member of the new school's first graduating class, which he did. Upon completion of medical school, he joined the United States Army in the medical core and was stationed with the rank of Captain assigned to the Governor of the Panama Canal Zone. When asked about his military service, Henry would state, “I don’t feel like I served my country. My country served me.” Following the service, Henry interned at Kansas City General Hospital in Kansas City, Missouri, and later completed his three year residency there in Obstetrics and Gynecology. In 1949, Henry married the love of his life, Wanda Campbell. He often marveled at the divine intervention that placed the two of them in the same place at the same time on the fateful evening their paths crossed one Christmas in Sulphur Springs. They moved to Longview in 1952, where Henry began his practice. His office was located directly across from the hospital on what is now part of the Good Shepherd Medical Center’s front parking lot. His “jog” across Fifth Street into the hospital and up the stairs to the second floor Labor and Delivery frequently and intermittently during the day was familiar to hospital personnel and indicative of his medical specialty. He was affectionately referred to as “The Father of Longview” delivering approximately 7,000 babies during his career-most being born at GSMC. He loved his work and said many times he always felt honored each time he was chosen to be a part of such a special time in families’ lives. He simply could not believe his good fortune being able to make a living doing what he loved to do, and declared he would have done it for free had he not needed to support a family. Dr. McGrede was a former member of the American Board of OB-GYN and a Fellow of the American College of Surgeons and the American College of OB-GYN. He was a member of the American Medical Association, the Gregg County Medical Society, and a former Chief Of Staff of GSMC. Henry retired thirty years ago, and in his retirement he enjoyed boating and fishing on Lake Cherokee and traveling wherever Wanda wanted to go-often in a motorhome. He was a very proud and engaged “DeDaddy” to his two granddaughters, attending every school function, dance recital, graduation, and life event. Ashley Ashcroft Kingham and Alexandra Ashcroft Crawley survive him. Henry also thoroughly enjoyed his close friend group respectfully referred to as “RODEO”, retired old doctors eating out. He was both delighted and very surprised when out about town and people recognized, remembered, and thanked him for the care he had given to them or to someone in their family. Henry was an honorable, humble man who always saw the best in people and in every situation. He had a strong spirit, coupled with a kind heart and gentle soul. His dry wit, quick sense of humor, and amazing memory made his many fond memories and life stories entertaining. He was profoundly grateful for the legacy his parents left him and for the life he was given. Henry is preceded in death by his beloved wife of 64 years, Wanda; his daughter, Kaye Lynn McGrede; and his brothers, Gilbert McGrede and Louis McGrede. In addition to his granddaughters, Henry is survived by his daughter, Anne McGrede Ashcroft; son-in-law, Benjamin Franklin Ashcroft; and, grandsons-in-law, James Anthony Kingham and William Eiland Crawley. Also surviving is his sister, Jane, nieces and nephews, and many dear friends. The family is very thankful for the compassionate, respectful, and quality care provided by Dr. Jeffrey McWilliams, Dr. Gurjit Singh, Dr. Rodney Slone, Dr. Robert Sansom, the nurses, and support staff of GSMC. Heartfelt appreciation is also extended to First United Methodist Church and Heart’sWay Hospice, who provided care in his last days. In lieu of customary remembrances, contributions in Henry’s memory may be made to The Wanda Campbell McGrede Fund at First United Methodist Church benefiting Christian education and music ministries, or to GSMC Foundation. As Dr. Bob Parrott so eloquently expressed, “Like the many lives he has seen born into this world, we have witnessed the birth of a new life into his eternal home. He now lives in the heaven he brought to those around him here on earth."

The family of Dr. Henry Covington McGrede created this Life Tributes page to make it easy to share your memories.

Send flowers to the McGrede family.