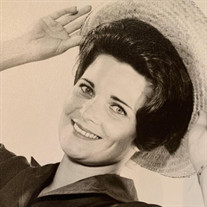 Helene Ruzicka Hall, beloved wife, mother and grandmother, passed away peacefully at home on Friday, June 18. Helene was born on September 1, 1937 to Emma and Joseph Ruzicka in Dallas, Texas. Helene attended Woodrow Wilson High School where she excelled as an artist for the school newspaper and yearbook. She studied geology and business at the University of Texas at Austin and later began her career at Sun Oil. In eighth grade, Helene met the love of her life, Jack Curtis Hall, and they were married August 20, 1960. After spending the first few years of marriage in Dallas, the Halls relocated to Longview to raise their family. They celebrated their 60th wedding anniversary last year. Helene and Jack were the proud parents of one daughter, Whitney Hall Schaap, and her beloved husband Troy. The joy and light of Helene’s life were her grandchildren: Jackson and Payton Schaap. The measure of her love was demonstrated in the countless hours she spent reading to her grandchildren; their lake house adventures; the time she dedicated to supporting their activities; and, her constant attention to their every interest. Helene was the most hands-on Granmarmie for the most blessed grandchildren. Helene was adept at using her artistic talent and creativity to benefit the Longview community with enduring programs. By forging relationships with area dry cleaners, she developed the “Cool Cat Coat Sale” where free coats were distributed to underprivileged children. This effort evolved to become what is now the “Coats for Kids” program. With art always close to her heart, Helene was also instrumental in the AlleyArts show on the Gregg County Courthouse lawn, which highlighted local artistic talent. Her fun use of crafts intertwined with her faith to help with First United Methodist Church’s Vacation Bible School. Always valuing intellectual curiosity and competition, Helene excelled in Bridge, gaining Masterspoints. She belonged to five different Bridge groups over her lifetime. Helene was also a fierce tennis player and was top ranked in both city and private leagues. Helene’s parents preceded her in death. Along with her husband, children and grandchildren, Helene is survived by her brother and sister-in-law Phil and Margie Ruzicka and their children; sister-in-law Ione Hall and her children; and, many loyal friends. Funeral services for Helene Ruzicka Hall will be Friday, June 25, at Noon at Rader Funeral Chapel, Longview with graveside services to follow on Saturday, June 26, at 11:00am at Restland Cemetery, Dallas. Honorary pallbearers are Troy Schaap, Jackson Schaap, Payton Schaap, Phil Ruzicka, Blake Hall, Todd Hall, Joe Ruzicka, John Ruzicka, Katy Ruzicka, Joe Don Holley, Nick Holley, Pete Schenkel and Paxton Tucker. The family would like to recognize Dr. Samir Germanwala, Dr. Glenn McDonald, Dr. Stephen Jayakar, Dr. Ben Mack, Melissa Sutton NP, Dr. Rodney Slone, and all of their exceptional nurses and staff that provided loving care for Helene. Helene’s caregiver, Joyce Davis, was an angel as well. In lieu of flowers, the family requests donations be made to: The Helene R Hall Valvular Heart Memorial Fund National Bank by Mail PO Box 6185 Westerville, Ohio 43086-6185

The family of Helene Ruzicka Hall created this Life Tributes page to make it easy to share your memories.

Send flowers to the Hall family.