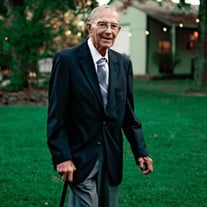 On the evening of April 16, 2022, Halley Danford Fuller, 91, left the loving arms of his family to be embraced by his heavenly Father. Halley was born on May 15, 1931, in Maude, OK to Ishmael Worth Fuller and Christine Oleta Fuller. He was the eldest son of Ishmael and Christine and had an elder half-brother, Robert, whom he looked up to, and nine other brothers and sisters, Colleen, that spent a brief time on earth, Carol, Patsy, Wyland, Lawrence, Beverly, Tom, Rethea and Sherrie. The family moved to Gregg County, Texas, in 1940, where Halley would continue to live and raise his family in Longview. Halley was a devoted husband to Lena Mae Fuller, his Sunshine, for 63 years. They were introduced in junior high by Halley’s best friend and Lena Mae’s brother, Bud Worsham, and married by the Rev. C.L. Porter at Mobberly Baptist Church in 1955. Halley was a devoted follower of Christ. Undoubtedly, his greatest joy on this earth was his family and serving his Lord Jesus. Halley was the father to three adventurous boys, Mac, Cole, and Joe. He loved camping, fishing, and water skiing with his family. Working as a lineman for almost 40 years, starting his career with L. E. Meyers, and retiring from AEP SWEPCO, brought him great pride. His call sign was “86,” and that is how his co-workers and family often referred to him. He had many great stories that he passed along to his grandchildren and friends. After retiring, Halley purchased a Gold Wing motorcycle. Each year on his birthday, he would leave for a 3-4 day trip. He rarely knew where he was headed before leaving, and saw much of Texas and southern states this way. Halley’s family and friends will remember his story-telling, quick wit, and poetry. He was hilarious and very clever. He wrote funny poems on the back of many photographs throughout his home and could make anyone laugh. Halley is now dancing in Heaven with Lena Mae (Ma) and his two sons, Mac and Cole Fuller, after having a big plate of Ma’s chicken fried steak, mashed potatoes, and rhubarb pie. “86 out!” A special thank you to the Alpine House Assisted Living staff, who cared for Halley in his last months and treated him with a high regard of respect and care, and took time to visit and enjoyed listening to his stories. Those left to cherish his memory are his youngest son, Joe Fuller and wife, Lucretia; daughter-in-law Holly Fuller; his grandchildren who loved him dearly, Maddie Fuller O’Laire, Joseph Fuller, Zach Fuller, and Ben Fuller and their families, along with his great- grandchildren Kinley Jo Fuller, Dabney Fuller, Izetta Fuller, Owen O’Laire, and Eva O’Laire; his sisters Carol Jackson; Rethea Gambill and husband, Bob; Sherrie Welch and husband Thomas; brother Tom Fuller and wife, Cindy; nieces and nephews, and great-nieces and nephews, and other special loved ones, Carolyn Fuquay Stormont, Nancy McKinley, and Milena Jankovic. Pallbearers are grandsons Joseph, Zach, and Ben Fuller, nephews Warren Worsham, Brian Long, and Robert Moore. Honorary pallbearers are brother Tom Fuller and brother-in-law, Leroy Worsham. In lieu of flowers, donations can be sent to Mobberly Baptist Church Lake Improvement Project, 625 E. Loop 281, Longview, Texas 75605. Funeral services for Halley Fuller will be held Thursday, April 21 at 2pm in the Chapel of Rader Funeral Home with the burial to follow at Gum Springs Cemetery. A visitation will be held one hour prior to the service in the Chapel.

On the evening of April 16, 2022, Halley Danford Fuller, 91, left the loving arms of his family to be embraced by his heavenly Father. Halley was born on May 15, 1931, in Maude, OK to Ishmael Worth Fuller and Christine Oleta Fuller. He was... View Obituary & Service Information

The family of Halley Fuller created this Life Tributes page to make it easy to share your memories.

Send flowers to the Fuller family.