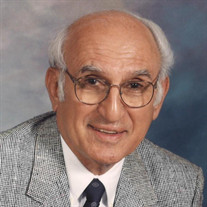 George Joseph was born on October 3, 1927, in Jefferson, Texas. He passed away peacefully at his home on August 2, 2021, surrounded by his family. George grew up in Jefferson, Texas and graduated from Jefferson High School in 1944. George loved sports and excelled at football, whereby he earned a scholarship to Texas A & M University. He graduated in 1948 and moved to Lubbock, Texas. There he worked in a bank before joining the Army and moving to Camp Chaffe, Arkansas. Afterwards, he moved to Fort Benning, Georgia where he entered Officers Candidate School becoming a 2nd Lieutenant. After the Army, George began his career in the oil and gas industry with United Gas Corporation in Shreveport, Louisiana. Afterwards he moved to Longview to work for F. R. Jackson. While working for Mr. Jackson he met the love of his life, Martha Virginia Pearce. They were married on November 29, 1957, at Trinity Episcopal Church where they have been faithful members ever since. The following year he went into business for himself, co-founding Key Production Company with Harry Bissell. In 1959, George and Martha had their first child, Amelia Ann Joseph followed by George Eric Joseph in 1961. George loved the oil and gas business, especially exploration. Though he was a business major he is better known for being a self-taught geologist. He truly loved and cared for everyone at the office and continued coming to work up into his nineties. He also loved his community. In the past he served on the Vestry at Trinity Episcopal Church, the board of Good Shepherd Medical Center and the board of Texas Commerce Bank. He is preceded in death by his parents, Joe and Adele Joseph, sister Helene Joseph, brother John Joseph and daughter Amelia Ann Joseph. He is survived by his wife Martha, son Eric and wife Shelly, grandchildren Sydney, Sadie and Aaron. Visitation with the family will be from 5-7 on Thursday, August 5th at Rader Funeral Home. Funeral services will be held at Trinity Episcopal Church Longview, August 6th at 10:00 am with a reception to follow in the parish hall. Private family burial will be at Rosewood Park. In lieu of flowers the family asks for donations to St. Jude Children’s Research Hospital, 262 Danny Thomas Place, Memphis, TN 38105-3678 or the Highway 80 Rescue Mission, 3123 W. Marshall Ave, Longview, TX 75602.

George Joseph was born on October 3, 1927, in Jefferson, Texas. He passed away peacefully at his home on August 2, 2021, surrounded by his family. George grew up in Jefferson, Texas and graduated from Jefferson High School in 1944. George... View Obituary & Service Information

The family of George Joseph created this Life Tributes page to make it easy to share your memories.

Send flowers to the Joseph family.