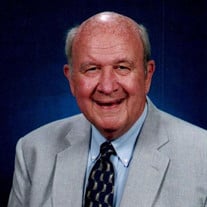 George Thomas (Tom) Hunt went to be with our Heavenly Father on July 12, 2021. He passed away at his home with his devoted wife of 62 years, Betty, by his side. Tom was born in Greensburg, Pennsylvania, on January 27, 1938, to parents George and Louise (Ament) Hunt. After graduating from high school at 16, he moved to Longview to attend LeTourneau Technical Institute. In 1959, he graduated with a degree in electrical science. In addition to his graduation, he and Betty were married and enlisted in the U.S. Army, all within the span of one week. During Tom’s military service, he and Betty lived in several areas of the country before eventually establishing roots in Dallas; while there, they developed a strong core group of friends and were active members of White Rock United Methodist Church. Tom participated in community service as a member of the Kiwanis Club and Masons. Tom and Betty returned to Longview in 1986, where they continued their Christian ministry at First United Methodist Church. Tom taught Sunday School, was Lay Director for Walks to Emmaus, sang in the church choir, led Disciple Bible Study, and was the Building Administrator. For the past several years, Tom and Betty have been active members of Greggton United Methodist Church. Tom served as an usher, helped with Vacation Bible School, and volunteered for various committees. More recently, Tom was happy to sing birthday well- wishes by phone to church members on their special day. Spending time with his wife, family, and friends was always a priority for Tom. Among his favorite group activities were square dancing, camping, playing bridge, golfing, and playing tennis, but his and Betty’s real passion was bowling, where they were the first place champions for many years. Tom enjoyed grilling and cooking, and his “world famous” lasagna was a family favorite. He also loved traveling, which led to taking numerous cruises over the years, as well as going on trips to the Holy Land and one mission trip to Africa. Tom’s personal hobbies included woodworking, model trains, photography and stamp collecting, and he was an avid reader throughout his entire life. Additionally, he was a major sports fan who loved the Texas Rangers, Dallas Mavericks, and Dallas Cowboys. That said, having been born in Pennsylvania, Tom never forgot his “terrible towel” roots and could occasionally be heard cheering for the Pittsburgh Steelers. After retirement from Siemens Energy and Automation, Tom followed in his father’s footsteps and taught over 100 Defensive Driving courses in and around the Longview area. Tom was preceded in death by his parents and by his younger brother, Freddy. He is survived by his wife, Betty; daughter, Cynthia Louise Hutton (husband Keith) of Irving; son Bradley Allen Hunt (wife Janay) of Coppell; grandchildren Jereme and Ryan Hutton of Missouri; grandchildren Juliana and John Thomas Hunt of Coppell; and one sister-in-law and brother-in-law, Shirley and Robert Kibbe of Longview. Also left to cherish his memory are nephew Mark Cureton of Longview; niece Laurie Elam of Streetman; nephew Lee Shaw of Fort Worth; niece Lindsey Daneshmand of Richardson; and four great-granddaughters. The family wishes to express their gratitude to the staff of Hearts Way Hospice, as well as to the church staff, prayer groups, Sunday School classes, and church family of Greggton UMC. A time of visitation for Tom’s family and friends is scheduled for Thursday, July 15, from 5:00-7:00 pm at Rader Funeral Home of Longview. A Celebration of Life is set for 2:00 pm the following day at Greggton United Methodist Church, with interment to follow at Memory Park. In lieu of flowers, designated donations may be made to the Youth Group, Building Fund, or apportionments of Greggton UMC 1101 Pinetree Rd. Longview, Texas 75604.

George Thomas (Tom) Hunt went to be with our Heavenly Father on July 12, 2021. He passed away at his home with his devoted wife of 62 years, Betty, by his side. Tom was born in Greensburg, Pennsylvania, on January 27, 1938, to parents George... View Obituary & Service Information

The family of George Thomas (Tom) Hunt created this Life Tributes page to make it easy to share your memories.

George Thomas (Tom) Hunt went to be with our Heavenly Father...

Send flowers to the Hunt family.