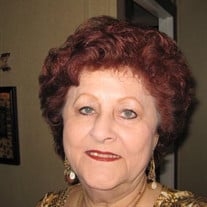 On August 23, 2021 Gaylene Stafford Gibson passed away peacefully into eternal rest and into the waiting arms of our Lord and Savior. Gaylene was born August 13, 1944 in De Queen, Arkansas and died August 23, 2021, Longview, Texas. Gaylene was affectionately known as Gigi by her grandkids. She was born in De Queen, Arkansas to Dewey Stafford and Dorothy Lee Long Stafford. She was preceded in death by her sister, Itha ‘Kaye’ Keller and her parents. Gaylene’s children include a son, Timothy Scot Gibson of Kilgore, Texas and a daughter,Tonya Gay Hendricks (Chris) of Longview, Texas. Her grandchildren include Stormie Batty (John) of Horatio, Arkansas, Tommy Birmingham of Kilgore, Texas and Tyler C. Hendricks of Longview, Texas. She was blessed with a very special niece, Suzie Carter Tolleson (Rex) of Hot Springs, Arkansas and her daughter Brittany Fell (Nick) along with their daughters Carter and Carley Fell. She has two nephews, Tracy Petet and Mike Petet. Gaylene grew up in De Queen and Horatio. She graduated from De Queen High School in 1962, where she was a cheerleader and voted most beautiful her senior year. She married Tony L. Gibson in 1964. They shared two beautiful children together and later divorced in 1976. During this time she was co-owner of their family owned restaurant, the Hob Nob in De Queen. Gaylene comes from a family of great cooks. She was happiest when cooking and sharing a meal with family and friends. After the restaurant closed, she became part owner of Lady Bug Fashions in De Queen. Later, she worked as an Administrative Assistant in Texarkana and Little Rock. Gaylene also worked for Marshall Home Health in Texarkana. She was transferred to Longview Home Medical as Manager and was later promoted to Regional Manager of Rotech Healthcare in Spokane, Washington. After spending two years in beautiful Spokane, she made Longview home again. She was the former owner of Forget Me Not gift shop until she retired. She worked as a caregiver for several years after retirement for a few very special ladies. She loved to help others and stay busy. Gaylene attended Fellowship Baptist Church for the last 15 years and loved her church family. Volunteering at church with the Young at Heart program and the Operation Christmas Child shoebox campaign were dear to her heart. Her favorite pastime was spending time with her family, friends and if a cheeseburger was involved, she was even happier. Gaylene was blessed with an amazing spirit, strength and great faith, especially through her last few years. She was a blessing and an inspiration to many. Gaylene’s family wishes to express their appreciation to Dr. Nirmal, Texas Oncology and Dr. Nayini , pulmonologist. A sincere and special thank you to Hearts Way Hospice for their commitment to her comfort and dedication to her care for the last 11 months. The family has decided to not have a memorial service at this time due to risk of Covid. Gaylene was concerned about keeping her loved ones safe during these uncertain times. In lieu of flowers, the family requests that a donation be made to Heartsway Hospice. https://www.heartswayhospice.org/about/donate/

On August 23, 2021 Gaylene Stafford Gibson passed away peacefully into eternal rest and into the waiting arms of our Lord and Savior. Gaylene was born August 13, 1944 in De Queen, Arkansas and died August 23, 2021, Longview, Texas. Gaylene was... View Obituary & Service Information

The family of Gaylene Stafford Gibson created this Life Tributes page to make it easy to share your memories.

Send flowers to the Gibson family.