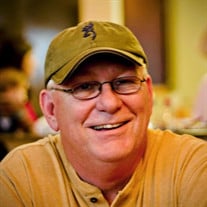 “Absent from the body…present with the Lord.” – 2 Cor. 5:8 Fredric Gene Dawson (you probably knew him as “Fred”) departed this life and walked into his Heavenly Homecoming on November 11, 2021. Fred was born on May 16, 1954 in Vanize, California and lived his adult life in Longview. His spirit is carried on by his wife, Cynthia Dawson, daughter & son-in-law, John & Cheryl Jaskiewicz, and his 2 grandsons, Tyler Romack & Dawson Jaskiewicz. What a blessing to imagine him being greeted by his granddaughter gone before, Aiden Grace Jaskiewicz. Beautiful thoughts of a beautiful reunion. Our Fred was an impressive, perfectionist of a man and had many fun quirks, some unable to be acknowledged in print! He would always keep a toothpick in his car visor, and anyone else’s for that matter, because you always need clean teeth. We apologize if you ever had to hold the board for him while he nailed the other end; you have special jewels in your heavenly crown. His hobbies became his life. For many years, you would find him hanging with most of his favorite people at the “Ingalls Shop” under a bright yellow #4 Hot Stock race car. He was known at the track as “Flying Freddie” amongst racing legends! There were also remote control airplanes that consumed an entire room in his home. They were meticulously constructed and when not in the air, were hanging from the ceiling. This was the “best storage” to make room for the film developing station that also took place in the same room. Cindy and Cheryl would often loose their garage parking for a random project; to name only a few an airplane reconstruction, Ford Tempo car painting, tiny RV, and never forget the ongoing collection of construction tools. Fred had the best taste in music, and it was never turned up too loud for him. The vinyl record collection stored in the same airplane room was extensive. GROOVY does not even touch the surface of his witty personality. And now he is gone. It’s sad, but not unexpected. Fred lived and shared his very full life with so many wonderful friends and family. Fred is survived by his wife of 48 years Cynthia Dawson, his daughter and son-in-law John & Cheryl Jaskiewicz, two grandsons Tyler Romack and Dawson Jaskiewicz, a very special niece Karas Hatch, and 7 nieces and 6 nephews. He is also survived by one sister, Cynthia McCarty. Fred’s favorite place to be was on the lake, fishing. The family requests those who wish to express sympathy to consider making a memorial donation to the Lake Cherokee Fishing Club, C/O Genia Holland, SD14 Lake Cherokee, Henderson, Texas 75652. We promise that Dawson will enjoy this club for many years to come!

The family of Fredric Gene Dawson created this Life Tributes page to make it easy to share your memories.

Send flowers to the Dawson family.