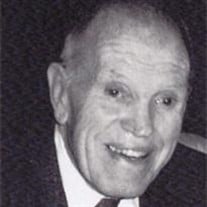 Frank M. Wright, Jr., age 92, passed away January 24, 2010, in Longview, Texas. He was born December 1, 1917, in Chicago, Illinois, the only child from the union of Frank Myron Wright and Goldie Caroline Thomas. He met and married on May 20, 1942, his wife of 63 years, Rhoda Ann Hofmann, daughter of William Frederick Hofmann and Rhoda Ann Mabey. They made their home for 32 years in the village of Oak Park, Illinois, and raised their three sons there. Frank was a graduate of Northwestern B.A., Harvard M.B.A., Chicago Kent L.L.D./J.D., and Rutgers Stoner Graduate School of Banking. He worked briefly for E.I. DuPont Co. chemical engineer and A.Stein and Co. assistant plant manager, before assuming his life's work as an attorney and counselor at law. In that capacity, he also taught business law at Northwestern for a short while. In his spare time, he later served for a number of years as adult leader and Scout Master for Boy Scouts of America, Troop 8, of Oak Park, Illinois. In 1979, Frank retired from his position as attorney and Vice President of the Trust Department's Real Estate Division with the Continental Illinois National Bank and Trust Company of Chicago, Illinois. He and his wife subsequently moved to Leisure World in Mesa, Arizona, where they remained for 26 years. Following the death of his wife in 2005, Frank relocated to Longview, Texas to be close to his eldest son. Frank and his wife were long-time members of the First United Methodist Church of Oak Park, Illinois, and later the Velda Rose United Methodist Church of Mesa, Arizona. He was a member of the Ancient Free and Accepted Masons, Medinah Temple Shriners, Scottish Rite, National Society of Magna Charta Dames and Barons, Americans of Royal Descent, Society of Mayflower Descendants, Sons of the American Revolution, and the Lions and Fez Clubs of Leisure World. Frank is survived by his three sons and their respective wives, Frank M. and Dianne Wright III of Longview, Texas, Thomas G. and Diane Wright of Jacksonville, Florida, and Robert A. and Lori Wright of Peach Tree City, Georgia; as well as six grandchildren and three great-grandchildren. The Wright family wishes to express their heartfelt appreciation for the kind attention and care rendered by the staff of Buckner Westminster Place and Beacon Hospice of Longview, Texas. Private interment will be held at Mountain View Memorial Gardens in Mesa, Arizona. Memorials may be sent to Buckner Westminster Place or Beacon Hospice of Longview, Texas.

Frank M. Wright, Jr., age 92, passed away January 24, 2010, in Longview, Texas. He was born December 1, 1917, in Chicago, Illinois, the only child from the union of Frank Myron Wright and Goldie Caroline Thomas. He met and married on May 20,... View Obituary & Service Information

The family of Frank Myron Wright, JR. created this Life Tributes page to make it easy to share your memories.