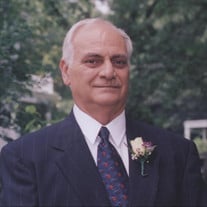 Francis John Bednarcik was born in Northampton, PA to John and Mary Bednarcik. His childhood was spent in Northampton and Cementon, PA helping his family with all sorts of chores and helping in the family-owned business, The Valley Hotel. This is where Chuck learned his many trades. Chuck graduated from Whitehall Public High School where he played the trumpet, football, and basketball. He was on the debate team and was Senior Class President. He proudly earned the Penmanship Award. In 1954, after graduation, he enlisted in the United States Air Force 28th Armament and Electronics Maintenance Sq. (SAC) and was eventually stationed in Thule, Greenland as an Electronic Navigational Equipment Repairman and Radar Specialist. Chuck earned his industrial engineering degree from Penn State University in night school while working at Cryotherm in Fogelsville, PA where he was involved in developing insulation and packing materials. He had other various and interesting careers as an industrial engineer for Mack Truck. He also worked for Sealy Mattress Co. in Rensselaer, IN and opened the Sealy Spring Plant in Delano, PA. He was the plant manager for Datacom in Berwick, PA and opened the Datacom plant in Longview TX in 1979. After Datacom, he owned and operated Texas Crown Chemicals, a water treatment supplier. He retired from INA in Longview as an oil and gas right-of-way agent in Colorado and Texas. Chuck also had many accomplishments and hobbies that included Cub Scout Pack leader, fishing, boating, woodworking, and golf. (He even made a hole-in-one). He had his single engine pilot license. He was an automobile enthusiast who could name the year and model of a car by looking at the headlights. Although he had a very detailed mind, he was also very creative. He enjoyed origami, cake decorating, cooking, designing his yearly family Christmas ornaments, and teaching his grandchildren who called him Pop. Chuck was married to Helen Hay Bednarcik for many years and had 2 sons, Scott and Gary. She preceded him in death in 1995. He married Nancy Dillard Goldwater in 2003. They enjoyed many happy years together. While traveling, one exciting trip was to the Masters Golf Tournament in Augusta, GA. Chuck is survived by his loving wife, Nancy, and sons Scott (Kerri) and Gary Bednarcik. Step-children Elizabeth Harrison (Robert Taylor) and Andrew Goldwater (Angela). Grandchildren Brooks Bednarcik, Johnathon and Jessica Bednarcik, step-grandchildren Joshua and Ethan Harrison, Brianna and Makayla Goldwater, and Abbi and Andrew Taylor. Siblings are Mary Ann Weaver, Bernadette Fegely, Robert Bednarcik, and Dennis Bednarcik. Sister-in-law Mary Bird and many nieces and nephews. Chuck was a man of integrity and always had a positive attitude. He loved God, his family, and his country. His humorous, caring concern for his family and inquisitive mind will be greatly missed. He was a special and remarkable man. The family would like to thank all the staff that cared for Chuck at Christus Good Shepard, Select Specialty, and Texas Home Health. Services will be Tuesday, January 11, 2022, at Rosewood Park Mausoleum Chapel in Longview. Visitation is at 1:00 pm with a service at 2:00. Arrangements are under the care of Rader Funeral Home in Longview. An online memorial book may be signed at www.raderfh.com. A kindly request to wear masks is encouraged.

Francis John Bednarcik was born in Northampton, PA to John and Mary Bednarcik. His childhood was spent in Northampton and Cementon, PA helping his family with all sorts of chores and helping in the family-owned business, The Valley Hotel. This... View Obituary & Service Information

The family of F. J. "Chuck" Bednarcik created this Life Tributes page to make it easy to share your memories.

Francis John Bednarcik was born in Northampton, PA to John and...

Send flowers to the Bednarcik family.