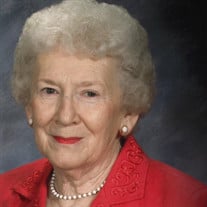 The family is having memorial service for Elvera Jungbecker Huff, age 85 will be held Saturday, March 2, 2019 at 10am at First United Methodist Church, Longview with Reverend Jay Jackson officiating. Private entombment will take place at a later date at Lakeview Memorial Gardens Mausoleum, Longview. Cremation arrangements are under the care of Rader Funeral Home, Longview. Mrs. Huff was born December 11, 1933 in Houston, Texas. She was the third daughter of Alfred A. and Hulda C. Sander Jungbecker. Mrs. Huff passed away February 24, 2019. She was preceded in death by her husband of 57 ½ years, Jack D. Huff, her parents, one sister and two brothers-in-law, Arline and Gene (C.E. Lasater) and Ken Hurley. Mrs. Huff graduated from Reagan High School, Houston in 1951. She received a Bachelor of Music Education Degree from North Texas State College in 1955. She was a member of Sigma Alpha Iota, International Music Fraternity, and Kappa Delta Sorority. She taught elementary school music in Houston. After marrying and moving to Dallas, she continued teaching public school music. On December 28, 1955, she married Jack D. Huff at First Evangelical Church, Houston. After moving to Longview in 1961, she taught piano and did substitute teaching. She served as church pianist and organist at various churches in Longview and Texarkana, where Mr. Huff’s work took them from 1968-1971. She was a member of Texas Federation of Music Clubs, United Methodist Women, Longview Piano Teachers’ Association, and National Guild of Piano Teachers. Through the years she helped entertain at many school, masonic, civic and church events as accompanist. She played for P.M. services (2nd and 4th) Sundays at FUMC from 1997-2007 and thru the years for Sunday school. when not serving as accompanist, Mrs. Huff sang with the Chancel choir, and played with Hurst Handbells. She played for communion services at Buckner and Colonial Village. Teaching piano and knowing the families of her students was one of the joys of her life. Accompanying singers and playing for congregational singing gave her great satisfaction. It was her hope that hymn singing would bring people closer to the Lord. In 2006 she wrote a song, “Spirit of Longview” which was performed at FUMC by the chancel choir and handbells. Dr. James Snowden arranged the song for the East Texas Symphonic Band to perform along with Paul Robert’s FUMC choir ono May 18, 2007 at Pops in Teague Park. Elvera lived the full circle of life and was grateful. She is survived by sons Preston D. Huff and his wife Trisha and Clifford W. Huff and his wife Deania. Granddaughter, Emily R. Jacobs and her husband Weston, Great granddaughter, Janey E. Jacobs. Sister, Edna J. Hurley, nieces Carolyn Hurley, Marilyn and Lonnie Lambert, nephew and wife David and Kay Lasater, and their daughters Sarah and Julia. Great nephews Adam and Katie Lambert, Ryan and Holly Lambert, sister-in-law, Lou Ellen Brown and husband, Gene, Nieces-in-law, Ann-Marie Murrell and Lisa Brown.

The family is having memorial service for Elvera Jungbecker Huff, age 85 will be held Saturday, March 2, 2019 at 10am at First United Methodist Church, Longview with Reverend Jay Jackson officiating. Private entombment will take place at a later... View Obituary & Service Information

The family of Elvera Jungbecker Huff created this Life Tributes page to make it easy to share your memories.

The family is having memorial service for Elvera Jungbecker Huff,...

Send flowers to the Huff family.