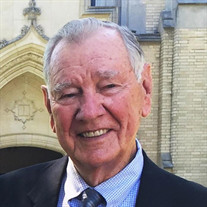 Elo Zinke, 92, of Avinger, left us on Feb. 19, 2022, after a battle with leukemia. He was born July 3, 1929, in Shiner, Texas, to Louis and Helena (Mueller) Zinke, the fifth of nine children — eight of them boys. They grew up in a German-speaking household, and Elo didn’t learn English until he was around 9 years old. Elo and his brothers worked the farm and helped bring electricity to neighboring houses in the 1930s and '40s, working alongside their father, who was constantly inventing things to make farm life a little easier. Those of us who love Elo often speculated that having a birthday so close to Independence Day inspired his big, adventurous life — and inspired us, in turn, to pursue big, ambitious dreams. When Elo declared at age 16 that he wanted to attend college, his father kicked him off the farm. Instead of giving up, he registered at Texas A&I and earned his way driving school buses and working at a creamery, living off ice cream. Still short on funds, Elo enlisted in the United States Army Air Force at age 17 where he achieved a private pilot's license while learning about military radar installation. He returned to school at the University of Texas at Austin to pursue engineering and business degrees but soon ran short of money again, so he accepted a lucrative offer to install radar for military contractor Philco, throughout post-war Europe, Middle East and North Africa. When he returned to UT to complete his degree — he met Elizabeth Hazard, who captured his heart and said "yes" to his proposal after a two-week courtship. Together, Elo and Liz worked through his graduation from UT, so he was very proud of being a UT Longhorn. Elo began a career with State Farm in Houston and then spent 21 years with Texas Instruments in Dallas, where he welcomed three daughters - Kimbra, Karen and Kristina while working on LED circuitry for the NASA space missions and development of the Ford lighted door lock along with many Department of Defense contracts. After a short term investment in an independent enterprise in Lockhart, TX, he returned to TI in Lubbock where he was able to pursue his passion of building and flying experimental aircraft. He completed 2 planes, the KR1 and Quickie II, before his early retirement, serving 27 years at TI. Next, was a move to Plano to work with Digital Switch Corporation and finally retiring after 10 years to pursue his dream of building his "darling" the Avid Mark IV in Idaho. He and Liz sold their house, bought a 42 ft. RV and took off to finish the plane, fly it home and then enjoy 5 years exploring North America from Washington and Glacier National Park to Nova Scotia and Florida and many points between. Cross country flight adventures to Oshkosh WI and Florida for national fly-ins kept him in the air regularly. Eventually, they settled for 25 years at their happy place in Avinger, Texas, lovingly referred to as EEZ Landing where they joined a close-knit community of friends and fellow plane enthusiasts. He loved all things polka, listening to polka music when he could and teaching polka dancing to anyone who would let him. He also spent time volunteering with the Texas Ramp Project, helping to build wheelchair ramps for people throughout Texas. Elo traveled the world with his family and was an avid supporter and cheerleader for his children, grandchildren and extended family. Full of advice about family history, investing and RV-ing, he enjoyed sharing with anyone who had time to listen. Family was his greatest joy, so his July Birthday was always a big family event. Elo was preceded in death by his wife, Elizabeth; his parents, Louis and Helena (Mueller) Zinke; his seven brothers; his son-in-law, Mark Valachovic; and his daughter, Karen Cross. He is survived by his daughters, Kimbra Valachovic of Richmond, Texas, and Kristina (John) Hallam of Dallas; his son-in-law, Craig Cross of Auburn, Wash.; his seven grandchildren, Andrea (Willie) Hoppe, David Elo Valachovic, Stephen Valachovic, Elo Gaston Hallam, Henry Hallam, Meredith Hallam and Crimson Cross; his sister, Helen Stock of New Braunfels, TX and many nieces and nephews who have wonderful memories of time spent with Uncle Elo; and his longtime housekeeper, caregiver and friend, Maggie Gomez. Visitation is from 5-7 p.m. Friday at Rader Funeral Home in Longview, Texas. Services begin at 1 p.m. Saturday at First Lutheran Church in Longview. Graveside services will be Feb. 28 in Yoakum. In lieu of flowers, the family requests that donations be made to the Texas Ramp Project, PO Box 832065, Richardson, TX 75083-2065.

The family of Elo E. Zinke created this Life Tributes page to make it easy to share your memories.

Send flowers to the Zinke family.