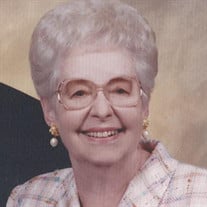 Elaine Martin Rice, 85, was called to her Heavenly Home in the evening hours of September 14, 2017. Elaine was born June 7, 1932 to Buford Glover and Era Taylor Martin in Paris, Texas. She was a 1950 graduate of Paris High School and attended Paris Junior College. She was employed as a telephone operator for Southwestern Bell in Paris before she married her best friend, James “Chubby” Rice on November 22, 1952. After her children were born, she devoted herself to making a happy home and was very successful at it, being especially famous for her pecan pies. Anyone who met and talked with Elaine knew her first Love was her Savior, Jesus Christ, and that she longed for His return. She filtered everything she did or said through that Promise. She was always interested in whatever was going on in the world and how events were related to Christ’s soon return. She wanted everyone to be watching for His coming! Her family often stated that she could do stand-up comedy, as she was quick-witted and always had a quick, smart funny reply. She remained involved in life in every way, whether in her Bible study, her doll collection or her avid devotion to current history as it unfolded. Her recent hospital stays resulted in nurses coming from every floor to meet her, calling her a “Rock Star, as she was always cheering them on and appreciated all they did for her. Elaine is survived by her loving children; son, James Martin Rice and wife Renee’ of Lake Cherokee; daughter, Lisa Rice Jones and her husband John Lee Jones of Tyler. She was “Grandma” to her grandson, Jeb and his wife Betsy Jones of Tyler and “MeMaw” to her granddaughter, Leigh Elaine and her husband, Brandon Namken of New Braunfels. Her truest joys included her great-grandchildren(who lovingly called her GG); Griffin Lee Jones, Riley Anne Jones and Reagan Elizabeth Jones of Tyler and Clayton James Namken and Blayne Curtis Namken of New Braunfels. Also surviving is her niece and her husband Becky and Larry Reaves of Paris. Preceding her in death were her parents; a brother and sister-in-law, Richard and Gail Martin and their sons, John Martin and Bruce Martin. Graveside celebration of Elaine’s life will be held Sunday, September 17 at 1 p.m. at Lakeview Memorial Gardens, 5000 West Harrison Road in Longview. Her family will share favorite scriptures and favorite memories and praise God for her presence in their lives.

Elaine Martin Rice, 85, was called to her Heavenly Home in the evening hours of September 14, 2017. Elaine was born June 7, 1932 to Buford Glover and Era Taylor Martin in Paris, Texas. She was a 1950 graduate of Paris High School and attended... View Obituary & Service Information

The family of Elaine Martin Rice created this Life Tributes page to make it easy to share your memories.

Elaine Martin Rice, 85, was called to her Heavenly Home in the...

Send flowers to the Rice family.