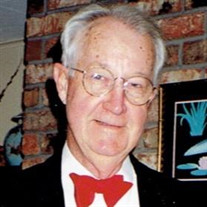 Loving husband, father, grandfather, great grandfather, physician and friend Edwin Errol Buckner, MD went to be with the Lord on November 20, 2018. A memorial service will be held at 11:00 a.m. on Friday, November 23 at Trinity Episcopal Church in Longview, officiated by Rev. Dr. Frank W. Hughes. Visitation with the family will immediately follow the service. Born in St. Louis, MO on April 5, 1928 to Errol Ezra and Jennie June (Rausch) Buckner, Edwin considered New Orleans his hometown and had fond memories of growing up in Metairie playing on the shores of Lake Pontchartrain. He attended Metairie schools and graduated from Metairie High School. After one semester at Louisiana State University, he joined the United States Navy at 17, served for two years, and earned the Victory Medal. Upon completion of training in San Diego, Edwin requested placement near the ocean; he was sent to Memphis, TN. Following his Naval service, Edwin returned to LSU for two years and two semesters, at which point he was accepted at The Tulane University School of Medicine (without an undergraduate degree!). While attending the uptown Tulane campus, divine intervention placed Edwin and Aurora Sarah Sanguily on the St. Charles street car on the same morning; she was en route to Loyola University of the South. The Buckners married in 1951 in New Orleans upon Aurora’s graduation, while Edwin was a junior in Medical School; they often remind the family that none of us would be here had they never met! After graduating from medical school, Edwin interned at Confederate Memorial Medical Center in Shreveport, LA, and completed his residency in family medicine at E.A. Conway Hospital in Monroe, LA. In 1955 Edwin & Aurora moved to Longview where Edwin joined the Medical and Surgical Clinic. In 1970, he began his solo practice and was proud to serve as Chief of Staff of Good Shepherd Medical Center, President of Gregg County Medical Society, and as a member of the American & Texas Medical Associations. In 1975, Edwin was installed as a Diplomat for the American Academy of Family Physicians, for which he passed board certification and was a member of the inaugural class. During this time, Dr. Buckner also enjoyed playing as a violinist with his son Errol and daughter Judy in the Longview Symphony under the direction of Dr. James Snowden. Dr. Buckner retired in 1990; innumerable community members were welcomed into this world and cared for during his 35 years practicing medicine. During his retirement, he enjoyed fishing with friends at Lake Cherokee, playing golf (he made a hole in one!), and ballroom dancing with Aurora, his sweetheart. Edwin was also a member of the R.O.D.E.O. club – Retired Old Doctors Eating Out – with his close friends, where he was known for his dry wit. He was the consummate Southern gentleman, a kind heart and gentle soul who firmly believed ice cream should not be eaten during the winter months. He was an active member of Trinity Episcopal Church. During their 67 years of marriage, Edwin and Aurora enjoyed participating in many Elder hostels around the country and traveling the world with friends; mementos from their travels fill their home and stories of their experiences are cherished memories. Following a hospital stay in January of 2018, Dr. Buckner became totally blind, but ever the trooper, continued attending church, playing golf with the Thomas’s and dining out with family. This Easter, Edwin’s entire loving family gathered at Lake Cherokee for a gala celebration of his 90th birthday, a weekend filled with love, laughter, and joyful memories. Dr. Buckner is preceded in death by his parents, brother Robert Luther Buckner, and sister Janet Marie Shamburger. He is survived by his loving wife Aurora, son Edwin Errol Buckner, Jr., daughter Judith Janet and husband Wiley Thomas, and son Stephen Kelly Buckner. Also surviving their “Dida” are his grand and great grand children Trey Braswell, wife Amy and children Taylor Rose and Carter Edwin; Aurora Kelly and husband Dusty Whittemore and daughter Elizabeth Sawyer; Kristin Gray Buckner and husband Lyle Walker and children Elle Gray and Skylar Burton; Stephen Smith Buckner, wife Makenzie and daughter Lindlee Lace and Edward Lee Buckner. Additional surviving family include his brothers Donald Wayne Buckner and Lloyd William Buckner and wife Betty, and sister in law Judith Shirer; nieces Allison, Susan, Aurora, Maria, and Julie and nephews James, Michael, Carlton, David, Barry, Stephen and Greg. In lieu of flowers, the family requests that memorials be made in Dr. Buckner’s memory to Trinity Episcopal Church, 906 Padon, Longview, 75601; HeartsWay Hospice, 4351 McCann Rd. Longview, 75605; or the Lighthouse for the Blind. 411 W. Front St. Tyler, 75702.

Loving husband, father, grandfather, great grandfather, physician and friend Edwin Errol Buckner, MD went to be with the Lord on November 20, 2018. A memorial service will be held at 11:00 a.m. on Friday, November 23 at Trinity Episcopal Church... View Obituary & Service Information

The family of Edwin Errol Buckner M.D. created this Life Tributes page to make it easy to share your memories.

Send flowers to the Buckner family.