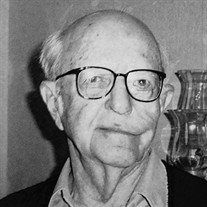 EDWARD L. THAXTON Edward L. Thaxton (Ed), loving father, grandfather and great-grandfather passed from this life at age 96 on Friday, February 10, 2017. Born on December 21, 1920, in Greensboro, Georgia, Ed was the only child of John Walker Thaxton and Emma Louise Walker Thaxton. During the Depression, Ed grew up fast and had his first job by age eleven...he learned how to work hard, and after attending business school in accounting in Atlanta, Georgia, went to work for the Georgia State Health Department, where he met Jeanne Alice Nelson. Ed and Jeanne were married in January 1946, in New Orleans, Louisiana, where Ed served in the Merchant Marine Maritime Service during WW II. Following the war, jobs were available in Longview, Texas, with a new company owned by R.G. LeTourneau. So the Thaxtons packed up everything they owned and moved to Longview, where Ed worked with Mr. R.G. and many other veterans in the early years of building the company. A daughter, Jacquelyn Lee, was born in 1947, and by 1953, Ed was LeTourneau's Personnel Manager, and another daughter, Jan Alice, was born. Ed was active in the Longview Jaycees and Lions Club for many years and was also instrumental in establishing the credit union for LeTourneau employees. After more than 15 years with LeTourneau, he left to become Human Resource Manager for Kilgore Ceramics in Kilgore, Texas, and retired from there in 1985. For many years, Ed busied himself restoring VW "Bugs," and was proud of buying, restoring and selling more than eighty VW Bugs during that time. His wife, Jeanne, passed away in 1998, and Ed remained in their home until recently. Mr. Thaxton, preceded in death by his parents and his wife, is survived by his daughter Jacquelyn Thaxton Cobb and husband Glen of Longview, daughter Jan Thaxton Thomas and husband Rex of Georgetown, Texas; granddaughter Shannon Cobb Crawford and husband Drew and their children, Makenzie, Megan and Macy Crawford, all of Longview; and granddaughter Jamie Cobb Breeden and husband Carlos and their children, Samuel, Nicolas and Nathan Breeden, all of Humble, Texas. Ed also leaves behind his little dog and best buddy, Micky. No formal services or visitation are planned for Mr. Thaxton. However, a private family graveside memorial will take place at a later date when Ed's ashes will be laid to rest alongside his wife, Jeanne, at Lakeview Memorial Gardens.

The family of Edward L. Thaxton created this Life Tributes page to make it easy to share your memories.

Send flowers to the Thaxton family.