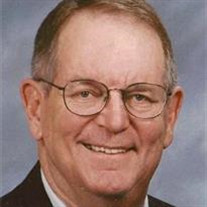 Edward Oliver Russell, Jr. , 76, passed away Wednesday, April 7, 2010 in Longview, TX, after a lengthy illness. He was born on October 7, 1933 in Beaumont, TX. He was the only child of Edward Oliver Russell, Sr. and Catherine Hill Russell. In 1951, Ed graduated from Austin High School and entered The University of Texas at Austin. Near the end of the Korean Conflict, he left UT and served 4 years in the United States Army, where he served in a guided missile unit. He also played on the Army basketball team, which traveled to various posts. Ed returned to Austin and was given a full scholarship to play basketball for the Longhorns. He later joined the University of Texas Orangebloods and Texas-Exes. After living in the Dallas area for a few years, Ed met and married Kathlyn Howe Gorman of Longview in 1961. They moved to Longview in 1962, to join her family owned-business, Gorman Motors, which later became Gorman McCracken Volkswagen-Mazda, Inc. The business operated for 42 years, which later sold in 2003. He belonged to the Longview New Car Dealers Association, the Texas Automobile Dealers Association and he served on the Volkswagen Dealers Council. He was known for his customer service, honesty and fairness. Because of this, the dealership won many awards. Ed became involved in many aspects of the Longview community. He belonged to the Chamber of Commerce, Longview Partnership, Jay-Cee's Junior Chamber of Commerce, YMCA, Daybreak Kiwanis, Pinecrest Country Club, Longfellow's, Delta Fishing Club, East Texas Oilmen's Golf Association, Greater Longview United Way, Good Shepherd Health System Auxiliary, Longview Regional Medical Center 's Auxiliary, and Lobo Booster Club. He attended the First Christian Church, spending many hours volunteering and assisting with fundraising events. He enjoyed numerous activities, including playing many years of basketball and volleyball at the YMCA and the Court House Athletic Club, golfing with friends at PCCC and other area Country Clubs, fishing and boating, or being at the lake or ocean . He liked to travel, ballroom dance, attend ballgames and other sporting events, spending time with his family & grandchildren, telling an assortment of jokes and stories, and relaxing at Lake Cherokee. Ed was a huge sports enthusiast, following the Lobos, the Longhorns, NCAA and the Cowboys. Ed was preceded in death by both his parents and his son, Edward Oliver "Rusty" Russell, III. He is survived by his wife of 48 years, Kathlyn "Kathie" Gorman Russell, their daughter Kimberly Ann Russell Brown, daughter-in-law, Jana Meyers Russell, and three grandchildren, Ryan Oliver Russell, Ruth Anne Russell and Gorman Elisabeth Brown, all of Longview. His sister-in-law, Sharon Howe Gorman Gredler and her husband, Dr. Erich W. Gredler, and a nephew, Dr. James Erich Gredler, and his wife, Dr. Michaela Gredler and their two children, David and Theresa, and a niece Jennifer Gredler, all and of Austria. Visitation will be at Rader's on Sunday, April 11th from 3:00 – 4:30. A celebration of Ed's life will be held at Rader Funeral Home Chapel, Monday, April 12th at 10:00 a.m., followed by a burial at Rosewood Cemetery. The family wants to express their sincere gratitude to their friends and to the members of First Christian Church who supported and uplifted Ed, and those around him, with their concern, prayers, visits and many kind deeds. To the doctors who cared for him; we will always be grateful. We thank the staff of Highland Pines Nursing Home for the wonderful care they gave Ed and the kindness they have shown. And to the staff of Longview Regional Medical Center, thank you for the care and comfort you gave Ed and our family these last few weeks. Memorials can be made to the First Christian Church, Longview or to the charity or medical organization of your choice.

The family of Edward Oliver Russell created this Life Tributes page to make it easy to share your memories.

Send flowers to the Russell family.