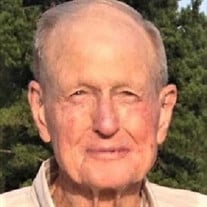 DO TO A SUDDEN FAMILY ILLNESS SERVICES ARE POSTPONED TO A LATER DATE Red departed this earth for his heavenly home on Sunday, September 12, 2021. It is fitting it was Sunday as he always said, “It’s good to be in the Lord’s House!” Born in Mexia, TX on December 11, 1923, his family moved to Gladewater a few years later. As a young boy during the Great Depression, Red had to work hard to help provide for his family. After graduating from Gladewater High School, he completed training at Southern Aircraft in Dallas where he worked until he and his brother joined the Marine Corps on his 19th birthday. Red served with the Marine Corps 2nd Division in the Pacific during World War II and was in battles at Tarawa, Okinawa, and Saipan. Upon his return, he met the love of his life, Rosemary. They married in 1956 and shared 54 happy years together. Venezuela was their home for many years where Red worked his way up to General Manager of H&P in Anaco and later General Manager of Latin America Operations. Afterwards, he was a consultant in Colombia and Libya. He then returned to Venezuela where he and Bill Shivers managed SPA in El Tigre. Red accepted Jesus Christ as his Lord and Savior at a young age. During his time in Anaco, he was instrumental in establishing a Baptist church for the other Americans that was led by missionaries. He loved the Lord dearly and was always reading his Bible, reciting verses, or talking to the Lord in prayer. Red and Rose were long-time members of Longview Missionary Baptist Church. They sincerely loved their church family and enjoyed worshipping the Lord with them. Red was preceded in death by Rose. Survivors include his daughter, Rose Ann (Doug) Bremenkamp of Gulfport, MS; son, Mark (Jo) Markham of Lago Vista TX; and grandchildren Quentin Bremenkamp and Kelcey Rose Bremenkamp of Brandon, MS, Madeline Markham of Austin, TX, and Jake Markham of Dallas, TX. Visitation is scheduled for Wednesday, September 15, 2021, from 3:00 until 5:00 at Rader Funeral Home in Longview. Graveside services TO BE ANNOUNCED AT A LATER DATE. His family would like to thank Dr. Lewis Browne, Dr. Mark Wallis, and Dr. Clint Bruyere and their entire staffs for caring for dad for so many years in Longview. We would also like to thank Dr. Loren Fisher of Baylor Scott & White, Texas Home Health, Home Instead, and The Springs for caring for Red during his time in Lago Vista.

DO TO A SUDDEN FAMILY ILLNESS SERVICES ARE POSTPONED TO A LATER DATE Red departed this earth for his heavenly home on Sunday, September 12, 2021. It is fitting it was Sunday as he always said, &#8220;It&#8217;s good to be in the Lord&#8217;s... View Obituary & Service Information

DO TO A SUDDEN FAMILY ILLNESS SERVICES ARE POSTPONED TO A LATER...

Send flowers to the Markham family.