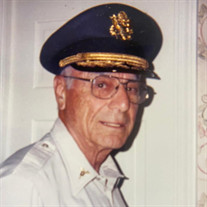 On Monday, December 6th, Dr. Edward “Ed” Mack, husband, father, and grandfather, passed away at the age of 95. Dr. Mack was born March 26, 1926, in Marshall, Texas. He completed his studies at Baylor College of Dentistry (Class of ‘47) and served in the Naval Reserve during World War II and the Army Reserve during the Korean War. Ed opened his practice in Daingerfield in 1948, and moved to Longview in 1964. He retired in 1988 in Longview. His son, Kelly, joined his practice in 1979 where they worked together until his retirement. In 1982, Ed and Alicia married in Longview and were faithful members of the Prime-Time class at Mobberly Baptist Church. Outside of spending time with his family and friends, Ed was an avid outdoorsman, who could always be found hunting or fishing. One of his favorite pastimes was elk hunting in Chama, New Mexico. In 1955, he found a plot of land which he coined “Elk Camp”, a place which still lives on within the Mack family to this day. Dr. Ed was preceded in death by his wife Alicia; father and mother, George and Bena Mack; siblings, Vicki Thomas, Sam Mack and Ester Knox. Survivors include his son and daughter-in law, Kelly and Patti Mack; stepson, Ronny O’Hearn; grandchildren, Adam [Amanda] and Sarah Mack; nephews, Joe Knox, Chris Mack, Andy Mack and Ben Mack all of Longview; sisters-in-law, Marion Mack and Tova Rivers and his dog, Ashley. Funeral services for Dr. Ed Mack will be at 10 AM on Saturday, December 11th, 2021, at Memory Park Cemetery under direction of Rader Funeral Home, with Scott Shulick and Jimmy Parker officiating. The family will receive friends at the funeral home Friday, December 10th from 5 until 7 PM. In lieu of flowers, the family requests consideration of a memorial contribution to the Mobberly Baptist Church Mission Fund (www.mobberly.org/give/) or Heartsway Hospice (www.heartswayhospice.org/donate/). A memorial guestbook may be signed online at www.raderfh.com.

The family of Dr. Ed Mack created this Life Tributes page to make it easy to share your memories.

Send flowers to the Mack family.