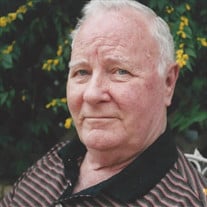 Dorsey Edward Erwin Jr., 85 of Longview, Texas passed away after a long & courageous battle, on July 3, 2017. Dorsey was born in Grand Saline, Texas, the only child of Dorsey Erwin Sr. & Louise (Dickerson) Erwin on January 20, 1932. He graduated from Mineola High School where he played football and had the nickname "Bones". He went on to attend Tyler Junior College where he met the love of his life, LaWeeta L. Morris of Quitman, Texas. They married September 14, 1951 and lived in Tyler, Kilgore, and Longview for 63 years. He served in the Army National Guard, 148th Armed Infantry Battalion, for three years. He was preceded in death by his parents, Dorsey and Louise Erwin, Sr. Dorsey started his business career with Firestone in Kilgore and then Longview, where he met his friend for life, Jimmy Peters. He owned the Skelley Station on Cotton St., as well as Hertz Rent A Car. He went on to own an auto repair shop and finished his career in the insurance business in his late seventies. Papaw, as his grandchildren & great grandchildren affectionately called him, loved smoking chicken, his specialty, on Sundays. He enjoyed traveling for work and pleasure where some of his best memories were made with Jimmy & Shirley Peters traveling to Seattle, San Francisco, Santa Fe, San Antonio, Florida, Mexico, New Orleans, Hawaii and many smaller trips. Two of Dorsey's favorite trips were with family, once camping from Longview to Jasper National Park, Canada in a pop out tent and then to Alaska, touring the state, the Yukon and Canada as he drove back to Texas. He was a member of the Elks Lodge where he served as an officer, the JC's, and Oak Forest Country Club. He was a member First Baptist Church for 63 years and in the Business Men's Bible Class. Dorsey is survived by his wife, LaWeeta, of nearly 66 years, daughters; Laura & Robert Russell; Becky & Randy Ferrell; Angela & Stephen Smith; Julie & Ty Hardin. Grandchildren; Jenny & Scott Nicol, Kadi & Nathaniel Hill, Jeb & Kayla Russell; Nathan Ferrell, Magen Ferrell; Sarah & Tyler Nolen, Rachel Smith; Julianna & Justin Sipes, Jeffrey Conant & Annamarie Conant. Also nine great-grandchildren: Logan, Westin, Peyton Williams & Evan Nicol; Anora Hill; Elizabeth & Ada Russell; Jude Ferrell; and Garrett Sipes. The world has lost a great & honorable man. He was a role model to his family to be honest, work hard & to be fair with others. The family would like to express its gratitude and sincere appreciation for the excellent care and kindness Dorsey received from the employees of Select Specialty Hospital, Good Shepherd Hospital, the Rehab Center in Good Shepherd, as well as all those who came to visit him in the hospital. It lifted his spirit and he enjoyed each and every one. Funeral service is on Saturday, July 8, 2017 at Rader Funeral Home at 10:00 A.M. with burial at Rosewood Park. Visitation is from 5:00-7:00 P.M. at Rader Funeral Home on Friday, July 7, 2017. Serving as pallbearers will be Robert Russell, Randy Ferrell, Stephen Smith, Ty Hardin, and Steven Peters.

The family of Dorsey Edward Erwin created this Life Tributes page to make it easy to share your memories.

Dorsey Edward Erwin Jr., 85 of Longview, Texas passed away after...

Send flowers to the Erwin family.