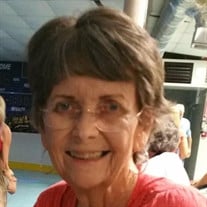 Dorothy Violeota Smith born October 5, 1937 to Cecille Ruth and Oliver Clyde Hamlin. Passed away on December 29, 2021. She resided at 1155 E. Hawkins Pkwy in Longview, TX. She was preceded in death by her late husband Jerry Lynn Smith and daughter Carolyn Donald. She is survived by daughters and sons in law, Gayle and Robert Ferrell of Hallsville; and Sherrie and Jeff Patterson of Longview. Grandchildren Rob Ferrell, Kim and Jeremy Cotton, Lindsey Melson, Jacob Donald and Shonna Rippee, Holly and Jay Bohannon, Morgan and Justin Berry, Jessica and Conner Walters, Spencer and Kristen Patterson. Greatgrandchildren Slayten Donald, Sutton Donald, Maddyn Donald, Tobi Melson, Graci Melson, Ruthi Melson, Kaydee Cotton, Paislee Cotton, Fisher Johnson, Eden Walters, Leeland Walters, Ember Walters. Step great grandchildren Kelsie Carmical, and Caden and Callie Perry. Dorothy graduated from Longview High School in 1955 and married the love of her life, Jerry Lynn Smith, also a Longview Highschool graduate. She enjoyed working the switch board for Southwestern Bell and other telecommunication companies. Later, she joined her husband in the family business, Smitty’s Four Wheel Drive and took care of bookkeeping and office management. Dorothy loved working with children in her church at Macedonia Baptist Church where she directed Vacation Bible School and taught children in Sunday School and Girl’s Auxiliary (GAs). Dorothy also played the piano for any service needed. Dorothy loved arts and crafts, tole painting, and stained glass. She also enjoyed many years of Colorado deer hunts with family and friends to the San Juan National Forest. Dorothy also loved western TV shows and held deep appreciation for American Indian artifacts. Her favorite past-time remained shopping. Dorothy was a devoted wife and wonderful mother. Her mother called her “the love of my life”. She was also, known affectionately as “Nanny” by all her grandchildren and great grandchildren. She was loved by all that knew her and her grandchildren still talk of her kindness. She was considered a “very sweet lady” by all her caregivers. She will be greatly missed by all those that knew and loved her. Services will be held in the Chapel of Rader Funeral Home on Monday, January 3, 2022 at 2 p.m. Visitation is from 1 to 2 p.m. prior to the service. Burial will follow at Hallsville Cemetery.

Dorothy Violeota Smith born October 5, 1937 to Cecille Ruth and Oliver Clyde Hamlin. Passed away on December 29, 2021. She resided at 1155 E. Hawkins Pkwy in Longview, TX. She was preceded in death by her late husband Jerry Lynn Smith and daughter... View Obituary & Service Information

The family of Dorothy Violeota Smith created this Life Tributes page to make it easy to share your memories.

Send flowers to the Smith family.