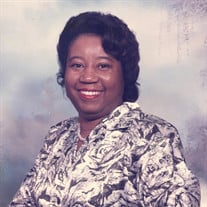 Sister Dorothy Malone Jones was born in Center, Texas to the late Asia and Katherine K. Malone. Dorothy accepted Christ into her heart, when she was a young girl, and joined Carroll Chapel C.M.E where her grandfather, George Kauffman was one of the founding father's, where she is currently a member. She was blessed to serve in the Church as an Usher, Choir Member, and served in other areas when needed to help sustain the life of the Church and was a faithful servant. In 1971, Sister Dorothy moved back to her hometown after briefly living in Galveston, Texas and Houston, Texas, and became an employee of East Tex Poultry, now Tyson Foods processing and distribution plant in Center, Texas dedicating 32 years of service, and there she met, Mr. James Earl Jones that became her husband of 35 faithful years. After retirement from Tyson Foods, Sister Dorothy took on a part-time job at Center Early Learning, where she later advanced to become the head teacher in the newborn and toddler room, teaching and molding the precious little lives God placed in her care, and later she became a Resident Care Assistant with Jennings Place. In 2018, Sister Jones moved to Longview, Texas with her daughter and grandson after a diagnosis of stage 4 metastatic breast cancer, where God provided the medical attention needed, which helped sustain her life for 3 ½ years. Sister Jones is preceded in death by her father, Asia and Katherine K. Malone; sisters, Georgia, Oma, Pearl, Lou Ella, and brother, Jessie. She leaves to cherish her memories, a loving daughter, Miss Equallia Malone of Longview, Texas, a very special grandson, DeQuincy Stanberry of Longview, Texas, 2 Sisters; Deloris Jordan, Atlanta, Ga; Dorothy Nell Johnson, Galveston, Texas; 1 Brother, Harold Asia Malone, Sr, Nacogdoches, Texas, and a host of special cousins, nieces, and nephews. A Celebration of her Life will be 10am, Saturday, April 10, 2021 at Rader Funeral Home in Longview, TX. Viewing will be 1 hour prior to service time. Interment will be that afternoon at McWilliams Cemetery, Shelbyville, TX at 2pm.

Sister Dorothy Malone Jones was born in Center, Texas to the late Asia and Katherine K. Malone. Dorothy accepted Christ into her heart, when she was a young girl, and joined Carroll Chapel C.M.E where her grandfather, George Kauffman was one... View Obituary & Service Information

The family of Dorothy Malone Jones created this Life Tributes page to make it easy to share your memories.

Sister Dorothy Malone Jones was born in Center, Texas to the...