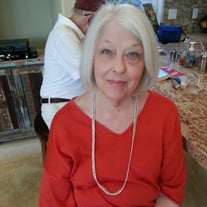 Doris Gibson Haynes (Dec. 18, 1932 – July 26, 2021) wife of the late Jerry Haynes, beloved mother, grandmother, and great-grandmother, died peacefully in her sleep on Monday morning in Longview, Texas. She was born in San Benito, Texas, to George and Clara Gibson, the youngest of three daughters; an older sister, Ann and an identical twin, Lois. The family moved from Texas when she was 12, eventually settling in Oakland, California, where she graduated from San Leandro High School in 1951. She attended UC Berkley and the California College of Arts and Crafts, focusing on art and design, the study of which she embraced throughout her life. She relocated to Dallas when hired as a stewardess for American Airlines, and it was on a flight to Houston in January of 1954 that she met her future husband and the love of her life, Dallas native Jerry Haynes. After a whirlwind romance, they were engaged and married in May of 1955. She worked as a model, notably for Neiman-Marcus, while Jerry pursued a career at WFAA-TV, where he eventually started the celebrated local children’s TV program “Peppermint Place” in 1961. They had three children. She fused her love of family with her appreciation of beauty, creating a home filled with a thoughtfully curated collection of art, antiques, and loving documentation of family members’ achievements and accomplishments. Always encouraging, she and Jerry provided a magical environment for their children and grandchildren, fostering a sense of wonder and awe at the joy of life. In later years, she channeled her interest in art by working as a docent for the Dallas Museum of Art, teaching elementary school students as part of an educational outreach program. Doris took great pride in her grandchildren and great-grandchildren and was known affectionately as “Dodie”. She will be remembered for her irrepressible wit, her unerring sense of style, her beautiful and generous spirit, and perhaps most of all for her love and support of her beloved Jerry, with a marriage that lasted for 56 years until his death in 2011. Along with her husband, she is preceded in death by her sisters, Ann Geich and Lois Lucey. She is survived by her daughter Carla Mann (husband Jack) of Longview, TX, and sons Gibson Haynes (wife Melissa) and Andrew Haynes (husband John) both of New York City. Grandchildren - Andrea Mann Doornbos (husband Jason) of Athens, GA, Molly Mann Hughes (husband Kyle) of Chicago, and Matthew Mann (fiancé Sophie), Curtis Mann, and Satchel Haynes, all of New York City. Great-grandchildren - Sidney, Everett, and Dottie Doornbos and Britton and Haynes Hughes. Services will be held at 11 a.m. on Saturday, August 7th, at Trinity Episcopal Church - 906 Padon Street, Longview, TX, 75601. The family has requested that in lieu of flowers, contributions be sent, in memory of Doris and Jerry Haynes, to the charity of your choice.

The family of Doris Haynes created this Life Tributes page to make it easy to share your memories.

Send flowers to the Haynes family.