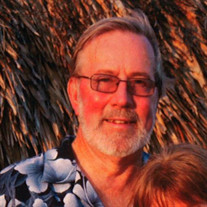 Funeral services for Donald Knight, 66, of Gilmer are scheduled for 10:00 am Thursday October 27, 2016 at Rader Funeral Home in Longview with Tony Harp officiating. Burial will follow afterwards at Sunset Cemetery in Gilmer. Mr. Knight died peacefully in his sleep on October 23 of an apparent heart attack. He is survived by his wife Terry Knight and his son Andrew Proffer both of Gilmer. Survivors also include Abby Richards and her husband Joseph; Megan Becker; Daniel Proffer and his wife Camille, Rebekah Proffer and Benjamin Proffer, all of Austin. He is also survived by his sister Carol Watson of San Francisco, California; brother Robert Knight and sister-in-law Patti of Arlington; brother Jim Knight and wife Adrienne of Wichita, Kansas; and brother Tommy Knight and sister-in-law Lisa of Longview; nephew Eric Knight and his wife Daleen of Arlington, nephew Steve Knight of Arkadelphia, Arkansas; nephew Austin Knight of Tulsa, Oklahoma, niece Erin Knight of Wichita, Kansas, and nephew Adam Hamill of Longview; grandniece Audrey Knight and grandnephew Cody Knight, both of Arlington; grandnephew Braedon Sims of Longview and grandniece Lily Knight of Lubbock. He will also be sorely missed by Mindy, his beloved dog. He also leaves behind many cousins and friends. Donald was born on June 29, 1950 in Winnsboro to Clyde and Ozelle Knight and moved to Longview in 1959. He graduated from Pine Tree High School in 1968 and was a life time East Texas resident. He owned and operated Ark-La-Tex Testing in Marshall. He was a long-time member of the East Texas Symphonic Band and was instrumental in starting its annual golf tournament. He was proud of the success of the golf tournament and funds raised for the band which enabled the band to perform at the Belcher Center. Donald enjoyed life and people. He loved playing golf, the Texas Longhorns, and having a good time with family and friends. He was a kind soul to animals big and small. He was the master of bad jokes and had one for every occasion. Pallbearers will be Rex Rice, Daniel Proffer, Benjamin Proffer, Andrew Proffer, Carl Meadows and Joey Adams. In lieu of flowers, memorial contributions can be made to the East Texas Symphonic band or a charity of your choice. A visitation will be held at Rader Funeral home from 6-8 PM Wednesday at Rader Funeral Home. Burial will be at Sunset Cemetery in Gilmer following the service on Thursday.

The family of Donald Knight created this Life Tributes page to make it easy to share your memories.

Funeral services for Donald Knight, 66, of Gilmer are scheduled...

Send flowers to the Knight family.