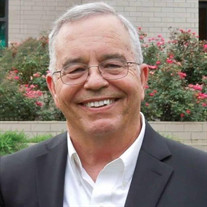 On Sunday, April 4, 2021, Donald “Don” Earl Johnson, age 72, left his wonderful life on earth to ascend to his heavenly home. His beloved family was by his side. The family will receive friends from 5-6:30 p.m. on Thursday, April 8, 2021, at Rader Funeral Home in Longview. A celebration of life will be held at 1:00 p.m. on Friday, April 9, 2021, at Winterfield United Methodist Church, 2616 Tryon Road in Longview, with Pastor Mark Pedersen officiating. The family welcomes all who loved Don to attend. Don was born to George and Imogene Johnson on January 21, 1949, in San Antonio, Texas. He was an honor student and outstanding athlete at Highlands High School, and received a football scholarship to Rice University, where he graduated in 1972. He later continued his education, earning a master’s degree from Stephen F. Austin State University. Don went on to pursue a fulfilling career as an educator, football coach and Assistant Principal. He began his career at Randolph High School, followed by Pasadena Rayburn High School, Longview High School, and Pine Tree High School, where he retired in 2008. In his 35 years of teaching and coaching, Don met many people that enriched and enhanced his life. Don joked that he moved to Longview “to marry a rich East Texas girl with an oil well.” He met Jan at the first coaching meeting of the year in 1981, and they were married four months later on November 20, 1981. One of Don’s favorite things to do was sit in his backyard watching the birds, critters, and his Bassett Hounds. He made sure they had plenty of food and love, and he had plenty of stories to tell about them. Don was an active member of Winterfield United Methodist Church of Longview, where he taught Sunday School for many years. Being the historian he was, he enjoyed the in-depth discussions that occurred and treasured the people in the class. Don was preceded in death by his parents, George and Imogene Johnson; stepfather, William “HoHo” Clark; brother, Norman Johnson; brother-in-law, Johnny McGibeny; and mother-in-law, Dortha Elliott. Left to love and cherish Don’s memory are his wife, Jan; daughter, Megan Johnson; son and daughter-in-law, Jordan and Brittany Johnson; grandchildren, Maddix and Maisyn Johnson; sister, Nurrie McGibeny; sister-in-law, Judy Johnson; stepbrother, William “Little Bill” Clark, Jr.; Randy & Ann Brogoitti; Dennis & Jackie McMahan; Tom & Gina Burk; Quentin & Julie Woods; Clint & Erin Brogoitti; and numerous nieces, nephews, great-nieces, and great-nephews. The family wishes special thanks to loving friends: Coach Robert & Gloria Bero, Coach Mark & Cindy Comfort, Coach Doug & Jane Cox, Coach Larry & Sherry Cloninger, the Winterfield Methodist Fellowship Class, hospice nurse Michelle Hollingsworth, caregiver Marilyn McLeod, and the kind staff at Heart to Heart Hospice. In lieu of flowers, the family has requested remembrances be made to Winterfield United Methodist Church, Asbury House Enrichment Center, or the charity of your choice.

The family of Don Johnson created this Life Tributes page to make it easy to share your memories.

Send flowers to the Johnson family.