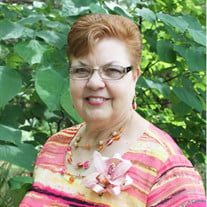 Dollie Rose Lanphier, age 74, passed away peacefully May 20, 2021 surrounded by her family, after a long battle with cancer. Dollie was born on March 15, 1947, to Clarence and Bertha Porter in Crowell, Texas. She graduated from Wichita Falls High School in 1965. Dollie met her husband, Larry Lanphier, in 1971 at Southside Assembly of God in Wichita Falls, and they married in June of 1972. In 1975, they went to Wiesbaden, Germany, where Larry was stationed in the United States Air Force. While in Germany, Larry and Dollie began their ministry together, being campus pastors for a church and working with Teen Challenge. Lori, their only child, was born in October of 1978, just before Larry finished his 4 years in the Air Force. In January of 1979, they all returned back to Texas where they pastored a number of different churches throughout north, central and south Texas for nearly 40 years. Dollie was a faithful pastor’s wife and led worship in many of the churches they pastored. She also worked as a Legal Assistant for several law firms while they were in ministry. Before Dollie died, she was very active in her church, Refuge Church of Longview, where she was a member and church financial secretary. Dollie was preceded in death by her parents; her husband, Larry; and two brothers, Elbert Porter and Travis Porter. She is survived by her daughter, Lori Burnett and husband Brett, of Winnsboro, Texas; two grandchildren, Zane Burnett and Jillian Burnett of Winnsboro, Texas; a sister, Vera Alcorn, of Longview, Texas; a brother Floyd Porter and wife, Faith, of Jonesboro, Arkansas; and numerous nieces and nephews. Visitation will be Monday, May 24, 2021, at Rader Funeral Home in Longview from 6-8pm. Funeral services will be at Longview First Assembly on Tuesday, May 25, 2021 at 10am with Pastor Jason Brandon officiating. If you would like to give a donation in lieu of flowers, donations can be sent to Refuge Church of Longview, PO Box 10296, Longview, TX 75608.

Dollie Rose Lanphier, age 74, passed away peacefully May 20, 2021 surrounded by her family, after a long battle with cancer. Dollie was born on March 15, 1947, to Clarence and Bertha Porter in Crowell, Texas. She graduated from Wichita Falls... View Obituary & Service Information

The family of Dollie Rose Lanphier created this Life Tributes page to make it easy to share your memories.

Send flowers to the Lanphier family.