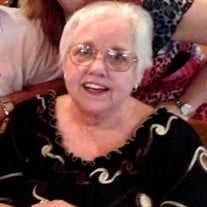 Jo Diane Ragland Skelton left this earth to be with our Heavenly Father on June 1, 2021 after a brief illness. Diane was born to Joe and Esther Ragland in Dallas, Texas on June 11, 1943. She attended and graduated from Hillcrest High School in 1961 and went on to earn her Bachelor of Arts degree in Education at University of North Texas in Denton, Texas. While in college, she won an award for her chicken spaghetti recipe from the Campbell’s Soup Company, which she later used to help catch her husband, Ray. After college she moved to Hereford, Texas to teach Homemaking and History at Stanton Junior High. Once there, she met, and started dating her husband-to-be, Ray. They were married December 28, 1971 and were later blessed with their daughter, Stephanie. Diane loved her family and was always involved with all of Stephanie’s multiple school and extracurricular activities. She loved to sew, cook, and relax with a good book or two. She enjoyed getting together with her friends to play Bridge. In January of 1984 they moved to Longview, Texas to start a business. In 1986, Diane began a career selling real estate with Century 21. While in real estate, Diane was a multi-million dollar seller. In the late 1990’s she went back into the teaching profession with the James Bradshaw State Jail Facility in Henderson, Texas until her retirement on March 1, 2020. Diane grew up attending the First United Methodist church. While living in Hereford, she and the family were active members. She is preceded in death by her parents, Joe and Esther Ragland; and two sisters, Judy Grubbs and Pat Sturdevant. She is survived by her husband, Ray Skelton; daughter, Stephanie Jones-Newlin and her husband, Dustin Newlin; grand-daughters Katelyn Jones & Joelle Hayden along with numerous nieces and nephews. Visitation with the family will be on June 8, 2021 from 1:00-2:00pm at the Pine Tree Church of Christ, Longview, Texas with a celebration of life service at 2:00pm, officiated by Jody Garner. Burial will be at the Rosewood Park Cemetery, Longview, Texas. The family would like to express their sincere appreciation to everyone who has offered prayers and encouragement. A special thank you to the medical personnel at Christus Good Shepherd Medical Center in Longview and Christus Mother Francis in Tyler, Texas.

Jo Diane Ragland Skelton left this earth to be with our Heavenly Father on June 1, 2021 after a brief illness. Diane was born to Joe and Esther Ragland in Dallas, Texas on June 11, 1943. She attended and graduated from Hillcrest High School... View Obituary & Service Information

The family of Diane Skelton created this Life Tributes page to make it easy to share your memories.

Jo Diane Ragland Skelton left this earth to be with our Heavenly...

Send flowers to the Skelton family.