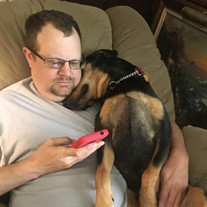 David was born February 15, 1976, and left us in his sleep January 15, 2022, much too early in life. David loved being a son, brother, uncle, and friend. For those who knew David, you know he battled mental illness most of his life. He never gave up or gave in. As most with mental health issues today, he tried other methods to stop the voices. Drugs-alcohol-combinations of all above-to no avail. Once he met with a doctor who took an interest in getting him stabilized his life took a turn for the better. We will forever be grateful to Dr. Harrell from Community Healthcore. Meanwhile David began taking full advantage of the groups available. If there was an open meeting, he tried it. He tried a lot. He had several groups that he didn't miss. He especially loved birthday night because he liked to eat. He spent his time taking friends to meetings, appointments, and Dr appts. If you were his friend, you were there forever-but you also learned that there were some lines not to cross. David loved auto mechanics and every fall the NHRA race in Ennis took lots of planning. He planned each meal specifically. This past fall, his dad went with him. One other thing we cannot miss Emmitt, because if you saw David, you saw his service dog Emmitt. He has the most calming demeanor of any dog ever. David was preceded in death by his paternal grandparents Paul Malone and Melba Anita Owen Price and maternal grandparents Robert Lee and Lillian Ruth McKeithen May. He is survived by parents Sidney Owen Price and Ruth Marie May Price, brother Robert Malone Price, sister-in-law Jessica Parks Price, nephew Jesse Malone Price and niece Sydney Autumn Price. Also survived by three uncles and two aunts and a host of cousins and friends. Two special friends include Randy Gary and Hunter Tillery Funeral services will be 10am, Friday, January 21, 2022, at Rader Funeral Home, Longview. Interment will follow at Rock Springs Cemetery. Visitation will be the morning of the service starting at 9am. An online memorial book may be signed at the funeral home website, www.raderfh.com.

David was born February 15, 1976, and left us in his sleep January 15, 2022, much too early in life. David loved being a son, brother, uncle, and friend. For those who knew David, you know he battled mental illness most of his life. He never... View Obituary & Service Information

The family of David Owen Price created this Life Tributes page to make it easy to share your memories.

Send flowers to the Price family.