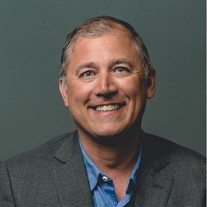 David Francis Penn born May 26, 1966, in Austin, Texas, son of parents, John Wilburn Penn and Leticia Flores Penn, died after a courageous battle with cancer on 7/17/21 at the age of 55. He is survived by his beloved wife Tamra, son Dawson and daughter Lexi of Longview, Texas, brother Joseph Penn, MD & sister-in-law Catherine, nephews Oliver and Elliot Penn, of Spring, Texas, his birth mother Sylvia Palumbo of Laredo, Texas, and numerous relatives in Texas and Monterrey, NL, Mexico. David was raised in San Antonio, Texas and attended St. Anthony High School Seminary and graduated from Roosevelt High School. He received a Bachelor of Science in Physical Therapy from Southwest Texas State University, San Marcos. He pursued post-graduate studies and received a Doctor of Physical Therapy from Creighton University in Omaha, Nebraska and a Fellowship in Orthopedic Manual Therapy from Regis University in Denver, Colorado. David’s greatest loves were his wife, his children, physical therapy, tennis, technology, and spending time and traveling (e.g., to countless tennis tournaments) with family and friends. David was a lifelong learner, clinician, and teacher. He pursued countless additional certifications, trainings, and achieved Board Certification Specialty in Orthopedic Physical Therapy by the American Board of Physical Therapy Specialties. David promoted excellence in physical therapy as demonstrated by 30 plus years of work as a physical therapist at various treatment facilities and hospitals in San Antonio, Tyler, and at CORE in Longview, Texas. He epitomized quality health care, access to care, teamwork, patient centered care, even while he underwent cancer treatment and recovered from countless surgeries. David was most recently the Director of Therapy Services at Longview Regional Medical Center. David had a passion for teaching physical therapy. In 2011 David received the Dorn Long Outstanding Clinical Educator Award from the Texas Consortium of Physical Therapy. He regularly gave back to his profession by providing lectures, demonstrations, supervising trainees, serving on interview panels and other committee work. More importantly, David was all about providing physical therapy advice and treatment to those in need – whether it be neighbor, friend, family member, or someone lacking health insurance. David often invited his patients to stop by his house afterhours, or he would perform house calls, all pro bono, of course. David had a passion for tennis. He won a state tennis championship as a team during his junior year at St. Anthony and went on to play college tennis on scholarship at Stephen F. Austin, and Southwest Texas State University. David coached Dawson and Lexi starting at an early age; they each went on to win high school state championships in singles. David was passionate about tennis whether it be talking about the game, strategy, rankings, watching matches, and coaching others. David was a competitive tennis player and he played tennis to the very end. David Penn’s family is most appreciative of all the care and compassion provided to him by countless physicians, nurses, other health care staff, and especially Robin Baker-Hill and the Compass Hospice staff and comfort, prayers and blessings by Father Dower and Monsignor Xavier during David’s final peaceful hours. In lieu of flowers please send donations honoring the memory of David Penn to: MD Anderson Cancer Center, Houston, Texas, or the American Cancer Society, or the cancer charity of your choice. Visitation will be held Thursday 7/22/21 from 5:00 PM through 7:00 PM at the Rader Funeral Home, 1617 Judson Road, Longview, Texas. A rosary will be held on Friday 7/23/21 at 9:30 AM at St. Mary’s Catholic Church, 405 Hollybrook Drive, Longview, Texas. A Mass of Christian burial will follow at 10:00 AM with the committal service to follow at Rosewood Park Cemetery, 1944 FM-1844, Longview, Texas. The Rosary and Mass will be livestreamed on Facebook and YouTube. Please go to the homepage of St. Mary's Catholic Church for the links.

David Francis Penn born May 26, 1966, in Austin, Texas, son of parents, John Wilburn Penn and Leticia Flores Penn, died after a courageous battle with cancer on 7/17/21 at the age of 55. He is survived by his beloved wife Tamra, son Dawson... View Obituary & Service Information

The family of David Francis Penn created this Life Tributes page to make it easy to share your memories.

Send flowers to the Penn family.