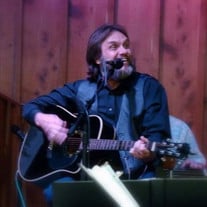 David Wayne Moore 69, of Beckville, Tx. passed away Wednesday October 6, 2021 in Longview , Tx. He was born in Abilene,Tx on March 30,1952 to David Dee Moore and Carrell Irene Moore. After working for Texas Instruments in Garland Tx, out of High School , David Wayne enlisted in the US Army August 16, 1974 . He served 3 years active, 3 years inactive ,14 months in Korea. He was discharged in August 15, 1980. David Wayne married his sweetheart Renee Moore on March 30, 1995 at his dad’s Church in Fairfield Texas. He was Assembly of God faith , and presently lead worship for Lighthouse church. Singing and playing music for the Lord was his passion. He loved his savior . David Wayne had several jobs after finishing his years in the US Army. He took pride in following his grandfathers footsteps and ran his dad’s shoe shop,went on to own an upholstery shop, installing satellites and owning his own Computer shop and music store on the mountain in Canton with his sweetheart Renee. He enjoyed playing the role of the Circuit Rider preacher on the mountain and singing . He grew up a Boy Scout under his dad’s leadership and always put his knowledge to use when camping or just surviving . He loved the outdoors and took his kids growing up to show them the great outdoors. He enjoyed fishing , camping, cooking outdoors ,building virtual rooms on the computer and singing and playing with his brother and sister. He loved playing golf and 42 with his brother Douglas . He loved holidays when the whole family got together to eat. He enjoyed people and never met a stranger. If he knew you needed something, he was always there to help. He went to all the funerals ,Family reunions, hospitals. He was always there to lend a helping hand. He had such a servant’s heart. He loved watching his grand babies play. He is survived by his mother, Carrell Garner of Beckville Tx. Wife, Renee Moore of Beckville Tx. Daughter Felisha Simmering of Longview Tx , Daughter Christal Simpson and husband Matthew of Jefferson Tx , Daughter Melody Stangle and husband Louis from Jefferson Tx, Son Adam Daugherty and wife Shannon of Henderson Tx , and daughter Danica Comans of Mississippi .surviving siblings, brother Douglas Moore and wife LaVerne Moore of Fairfield Tx. Sister Donna Ketchum and husband Alan Ketchum of Beckville Tx, numerous grandchildren, nieces , nephews, cousins, other relatives and numerous friends. Visitation is Monday October 11 at 6-8 The funeral service will be held at 10:00 a.m. on Tuesday October 12 at Rader Funeral Home in Longview Tx. With Rev. Tommy Brasher officiating. Interment will follow at Pleasant Hills Cemetery in New London Tx at 2:00 p.m. Visitation is Monday October 11 at 6-8 Pallbearers are Jonathon Ketchum, Jason Ketchum, Brian Moore, Christian Simmering, Hunter Madewell, Matthew Simpson, Adam Daugherty.

David Wayne Moore 69, of Beckville, Tx. passed away Wednesday October 6, 2021 in Longview , Tx. He was born in Abilene,Tx on March 30,1952 to David Dee Moore and Carrell Irene Moore. After working for Texas Instruments in Garland Tx, out... View Obituary & Service Information

The family of David Wayne Moore created this Life Tributes page to make it easy to share your memories.

Send flowers to the Moore family.