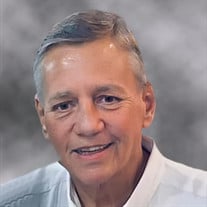 John David Mawer was born in Longview Texas on August 14, 1951 to John E. Mawer and Chloe Irene Mawer. David was the middle child and could be described as all boy! Growing up he enjoyed road trips with his family,.... And tormenting his sister Pat (that he adored) with his brothers Butch, Mark and Stevie. When he was a young boy he was active, playing baseball, little league, football league and basketball on a church league. He played football at Forest Park JR High and was a boxer in the Silver Gloves sponsored by the Boy’s Club. As a child he was awarded a medal by Mickey Mantle for winning a boxing match. In David’s teenage years he loved to race cars and burn up clutches. He loved his rock music and loved to play it loud. He graduated from Longview High School and as you know, once a Lobo always a Lobo. After high school he drove a 1950 Willys Jeepster convertible cruising with the top down. As David moved through life he enjoyed playing, watching and coaching all sports. He enjoyed hunting, drinking beer and playing cards with his friends (and not necessarily in that order). He took up golf and enjoyed golfing with friends and his wife. For many years he enjoyed time on the lake skiing, fishing or just cruising around the lake. He had a love for food and loved finding places to eat, new recipes to try out or planning a vacation around where the family would eat. No matter where you were or where you were going he could tell you a place you HAD to eat at and it was usually amazing. But throughout all his many years the thing he enjoyed the most was his family. He served proudly in The Army National Guard for several years. After high school he began a lifelong career with Motion Industries. He began as a salesman and successfully climbed the ranks to branch manager of several locations. He was proud of the branches he ran throughout the years, the employees that he worked with and the many friends he gained throughout the years with Motion. Motion Ind. is where he met the woman he would later call his wife. David married the love of his life Terrie in July of 1980 and began an amazing life where they welcomed 2 children. Lacie was born in 1983 and Nathan arrived in 1986. David was a devoted husband and father. He actively coached both his daughter and son’s sports teams and was at every event possible. He was a loving man who brought his wife and daughter Texas roses...just because. He spent time to make sure his son knew how to hunt, how to play every sport and modeled the way that a man should be. David was also very active in Gladewater Baseball’s little league and held several positions. David loved to travel with his wife Terrie and they had many adventures that will be cherished always. His greatest joys came along starting in 2007. David and his wife Terrie welcomed 5 amazing grandchildren into the world. Preston (2007), Raylea (2012), Jaden (2013), Madan (2015), and Maxwell (2016). He was lovingly referred to as Pop Pops by all of his blessings. He made sure he attended every baseball game, soccer game, basketball game, football game, cheerleading competition and Jujitsu match he possibly could. He would tell everyone he came into contact with about these amazing children that called him Pop Pops. One of his favorite pastimes was sitting on his patio talking with family and friends and watching his grandkids swim in his swimming pool and telling them to stop jumping off the waterfall. After years of fighting health problems David went to be with the Lord on July 21, 2021. He was surrounded by family and friends in his final hours and passed away peacefully at home. His family finds comfort knowing that he has gained his wings and is flying high with the Lord. David Mawer was preceded in death by his parents John E. Mawer and Irene Mawer, brother Jack Michael Mawer and grandparents Boyd and Ruth Knox as well as James G and Georgia Mawer. David is survived by his loving wife Terrie Mawer, his daughter Lacie Bohanon, his son Nathan Mawer and wife Kaitlyn Mawer, grandchildren Preston Bohanon, Raylea Mawer, Jaden Bohanon, Madan Mawer, and Maxwell Mawer, his sister Pat Modisett and husband David Modisett, his brothers James (Butch) Mawer, Mark Mawer and Steve Mawer along with many nieces, nephews, cousins and friends he considered family. Services will be held at Radar Funeral home in Longview on Tuesday, July 27, 2021. There will be a visitation at 2 pm and a Celebration of Life at 3 pm.

John David Mawer was born in Longview Texas on August 14, 1951 to John E. Mawer and Chloe Irene Mawer. David was the middle child and could be described as all boy! Growing up he enjoyed road trips with his family,.... And tormenting his... View Obituary & Service Information

The family of David Mawer created this Life Tributes page to make it easy to share your memories.

Send flowers to the Mawer family.