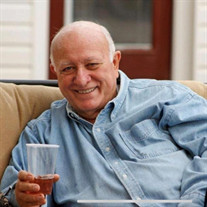 David Richard Goulden, known by his family as “Poppy”, stepped into glory on Tuesday, September 7, 2021 at the age of 74. He now stands healed in the presence of his Heavenly Father. David was born to Darrell Roland Goulden and Helen Merrill Goulden on November 2, 1946 in Marshall, Texas. David attended Marshall High School where he met the love of his life, Mary Karen Goulden. The two were married on September 29, 1967 and David remained a devoted and loving husband all the days of their marriage. The two were a testimony to Christ’s love and modeled what God intended by biblical marriage. After high school, David joined the United States National Guard where he served as a Master Sergeant for 15 years. He retired from service from the National Guard after 27 years. He then worked for Swepco for 10 years. After leaving Swepco, he went to work for Thomas & Betts corporation where he spent 20 years building relationships with many clients in the electrical wholesale business all over the East Texas area. If you were to ask him, he would tell you that his greatest jobs in life were that of husband, dad, and Poppy. His favorite job began after his retirement when his granddaughter Kendall was born in 2007. He spent the next 14 years of his life loving his family with all he had and spoiling his grandchildren every chance he could. Kendall and Caleb are blessed with many memories of their Poppy. David loved the Lord and he served the community during his lifetime. He and Karen were active in teaching children and with the local bus ministry at Macedonia Baptist Church for many years. He most recently served as an elder at 1 Family Fellowship. David walked faithfully beside his son, James, over the last 3 years as the Lord revealed his plan for 1 Family Fellowship in the Hallsville community. He was often found hanging sheetrock, running plumbing, and “overseeing” the many construction projects that have been ongoing. He was so proud of James and he was thrilled to see the Lord use their family to further the gospel through this church plant. David was preceded in death by his mother, Helen; his father, Darrell; and his brother, Bob. He is survived by his wife of 53 years, Karen Goulden. One son and daughter-in-law, James and Melissa Goulden and their children, Kendall and Caleb of Hallsville. Two brothers, Ted Goulden and Arley Goulden. A brother-in-law and his wife, Jimmy and Louella Iliff. Very special nephew and his wife, Shane and Tina Iliff (Katelyn) and a very special niece and her husband, Mandi and Jason McNutt and children. And a host of other family members and friends left to cherish his memory. There will be a time of visitation with a memorial service to follow in the chapel at Rader Funeral Home in Longview on Saturday, September 11th. Visitation will begin at 1:00 p.m. and the memorial service will begin at 2:00 p.m. A private family graveside service will be held at a later date. In lieu of flowers, memorial donations in memory of David can be made to the building fund for Hallsville 1 Family Fellowship at Guaranty Bank in Hallsville, Texas. Donations can also be made online at www.1familyhallsville.org/generous-giving or on GoFundMe using this link: https://gofund.me/299cf712. A memorial guestbook may be signed online at www.raderfh.com.

David Richard Goulden, known by his family as &#8220;Poppy&#8221;, stepped into glory on Tuesday, September 7, 2021 at the age of 74. He now stands healed in the presence of his Heavenly Father. David was born to Darrell Roland Goulden and... View Obituary & Service Information

The family of David R. Goulden created this Life Tributes page to make it easy to share your memories.

David Richard Goulden, known by his family as “Poppy”, stepped...

Send flowers to the Goulden family.