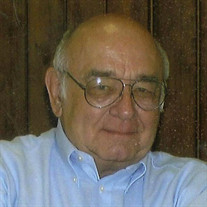 David Bodenheimer went to be with our Heavenly Father on Friday, April 15, 2022, at the age of 86. David is predeceased by his wife Caranelle, parents Zaner and Opal, daughter Dorinda Harper, and great grandson Kyle Suiter. The service of remembrance will be held at First Lutheran Church, 3901 Bill Owens Pkwy, Longview, TX on Friday, April 22, 2022, at 11:00 a.m. with Pastor Jeff Borgwardt officiating. Visitation will be held on Thursday, April 21, 2022, from 5:00 p.m. to 7:00 p.m. at Rader Funeral Home, 1617 Judson Rd, Longview, TX. Interment to follow the service on Friday at Rosewood Park, 1884 FM 1844, Longview, TX. David is lovingly remembered by his sister Diana Hodde; grandchildren Michelle Davison and Alicia Rundell; daughter Donna Ashby and husband Logan Ashby and grandchildren Jesse Ashby and Megan Ashby; daughter Dana Trout and grandchildren Delaina Horsley, Casey Jenkins, Courtney Tillery, and Drew Suiter; son Duane Bodenheimer and grandchildren Johnathon Bodenheimer, Ashley Bodenheimer, and Brett Seahorn, along with 23 great-grandchildren. In lieu of flowers, memorial donations may be made to the Hiway 80 Rescue Mission and/or First Lutheran Church in David’s name. David was born in Dallas, TX on November 6, 1935. He attended Woodrow Wilson High School before enlisting in the Coast Guard at age 19. He served proudly for 8 years from 1955 to 1963 in Boston, New Orleans, and the South Pacific. David and Caranelle were married on April 23, 1955. They were happily married for 62 years before her passing in 2017. David was a skilled electrical engineer by trade, a field in which he was awarded a patent and the opportunity to work and live in Australia with his family. He settled in Gladewater, TX in 1977 after purchasing C & D Hardware, which he and his wife Caranelle owned and operated for 15 years. He went on to work for the State of Texas until his retirement. After retiring and joining the First Lutheran Church, his family expanded even more, and his weekly Bridge games were as good as mandatory. His generosity and loyalty were admired by those within and outside of his family. David was a beloved patriarch answering to many names; Papa, Grandad, Dad, Pop Pop, and Daddy Daddy, just to name a few. His humor, wisdom, passion, and unrelenting love will be missed by so many.

David Bodenheimer went to be with our Heavenly Father on Friday, April 15, 2022, at the age of 86. David is predeceased by his wife Caranelle, parents Zaner and Opal, daughter Dorinda Harper, and great grandson Kyle Suiter. The service of... View Obituary & Service Information

The family of David W. Bodenheimer created this Life Tributes page to make it easy to share your memories.

David Bodenheimer went to be with our Heavenly Father on Friday,...

Send flowers to the Bodenheimer family.