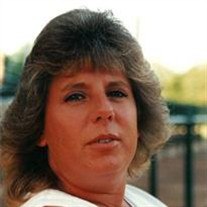 Darlene Lynae Jones passed away Monday, January 3, 2011, surrounded by her family. She was born on March 9, 1963, in Norfolk, Virginia to Robert and Jewel Davis. She was raised in the Virginia Beach and Outer Banks areas surrounded by cousins until her family moved to Texas when she was a teenager. She attended Hallsville High School and later earned an Associate?s Degree. She met and married Tim Jones in 1980. Two sons, Chad and Brandon, were born in the years that followed. After moving back to Virginia and making a home there, a daughter, Chelsea was born years later, though she was first mistaken for the flu. Shortly after, Darlene, Tim, and the kids moved back to Texas. There she became involved in the Hallsville School District and made many lasting friends. After leaving HISD, she became a sometimes member of Longview Stone, the family business. She gave her time and energy to the business wholeheartedly and her absence will be sorely felt. Darlene was a giving and unselfish woman that always put others before herself. A homemaker first and foremost, she toiled to make a loving environment for her family and friends. Three grandchildren were born during her life, Logan, Morgan, and Audrey, and she dedicated herself to them. Many days and nights were spent in the home and arms of grandma. She is survived by her parents, Robert and Jewel Davis of Virginia Beach, Virgina; her husband of nearly 31 years, Tim; her son Chad, his wife Tracie, and their children Logan and Morgan; her son Brandon, his wife Kristin, and their daughter Audrey; and her ?baby?, daughter Chelsea. She also leaves behind her dear sister, Kimber Kane, who could always make her laugh, her husband Adam, and their daughter Emma of Virginia Beach, Virginia; her brother, Bobby Jr., his wife Margo, and their children, Trevor, Tristan, and Tyler of Oak Ridge, Tennessee; and numerous cousins, nieces, nephews, and friends. Funeral services will be held at 4 PM Thursday, January 6, in the First Baptist Church of Hallsville with Reverend John Taylor officiating. Interment will follow in Hallsville Cemetery. Rader Funeral Home of Longview in charge of services.

Darlene Lynae Jones passed away Monday, January 3, 2011, surrounded by her family. She was born on March 9, 1963, in Norfolk, Virginia to Robert and Jewel Davis. She was raised in the Virginia Beach and Outer Banks areas surrounded by cousins... View Obituary & Service Information

The family of Darlene Lynae Jones created this Life Tributes page to make it easy to share your memories.