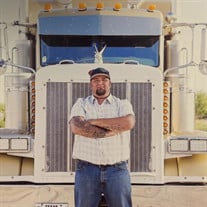 Services for Colin Wade Tischler will be held Friday, May 28 at 2 pm in the Chapel of Rader Funeral Home in Henderson. A visitation will be held from 12 - 2 pm prior to the service. A burial will follow at Duncan Cemetery. Colin Wade Tischler was born on June 16, 1981, in Plainview, Texas, but grew up in Henrietta, Texas. Even as a young child, Colin was always on the move. His high energy and adventurous spirit ultimately led to a lifelong passion for fishing, camping, and the great outdoors, which he loved to share with the people he cared about. Colin was a beautiful soul. Anyone lucky enough to meet Colin easily recognized his selfless, honest, and caring nature. He was self-driven and hard-working. He poured his heart and soul into his family and friends. He also was undoubtedly dedicated to his work, making runs in his second major love, his 18-wheeler, Big Booty Judy. Colin was many things to many people. A son. A husband. A father. A Poppy. A friend. He was someone who could always be relied on and trusted. Colin will be missed. He may have been called home before his time, but he will forever live on in the hearts and minds of those who knew him. Colin was preceded in death by his grandparents; Mauna Lou and Kenneth Raymond, Jeanette and Harvey Wayne Griffen, and Sue Tischler. He is survived by his wife, Joanna Adams Tischler, father and stepmom Mike and Judy Tischler, mother, Cathy Raymond Haley and stepdad, Steve Mahon. Stepparents, Tom and Connie Griffen, and sister, Kasea Griffin. He is also survived by his children; Kaylee Tischler, Alyssa Adams, Caleb McBee, Lane Tischler and Katelyn Rutherford. Along with his grandchildren; Layne Wade and Rowen Maddox, niece, Tinley Roberson and many more family and friends. Pallbearers for Colin are Josh Vaden, Scott Hamburger, Chris Turner, David Curtis, Caleb McBee, Bryan Ellison, Cody Arnold, Clint Shaar, Jerry Selinas, Jide Mohamed and Dustin Seay.

The family of Colin Wade Tischler created this Life Tributes page to make it easy to share your memories.

Services for Colin Wade Tischler will be held Friday, May 28...

Send flowers to the Tischler family.