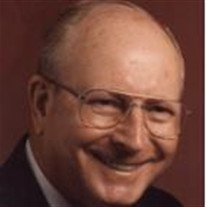 Mass of Christian burial will be celebrated at 12 p.m. Friday, March 23, 2018, at St. Anthony Catholic Church, with Father Jay Lucas officiating, under the direction of Rader Funeral Home of Longview. Mr. LeBrun passed away Monday, March 19, 2018, in Longview at age 92. Mr. LeBrun was born June 15, 1925, in Menominee, Michigan to Clarence E. and Agnes K. LeBrun. He had been a resident of Longview since 1995, moving from Katy, TX. He worked for International Paper his entire career retiring as sales manager in 1986. He was a loving husband, father, grandfather and great grandfather. Mr. LeBrun was preceded in death by his wife of 57 years, Therese V. LeBrun, parents; and brother Richard F. LeBrun and sister Phyllis A. Longhenry. Those left to cherish his memory are his sons and daughters-in-law, Arthur and Sharon LeBrun of Owings, MD., Allen and Jane LeBrun of Chester, ME, Paul and Darla LeBrun of Choctaw, OK., and Stephen and Laura LeBrun of Hallsville, TX; 8 grandchildren and 10 great grandchildren. He was a World War 2 veteran serving in the US Navy aboard the USS Shamrock Bay, CVE84 and honorably discharged after the war. In lieu of flowers, memorial contributions may be made to the Alzheimer's Association – Houston & Southeast Texas, 6055 South Loop East, Houston, TX 77087-1005; or to Bright Focus Foundation - Alzheimer's Disease Research, 22512 Gateway Center Dr., Clarksburg, MD 20871. A viewing will be held Thursday, March 22 from 5:00 p.m. to 8:00 p.m. with a Rosary recited at 7 p.m. at the funeral home. A memorial guestbook may be signed at www.raderfh.com.

The family of Clarence Anthony LeBrun created this Life Tributes page to make it easy to share your memories.

Mass of Christian burial will be celebrated at 12 p.m. Friday,...

Send flowers to the LeBrun family.