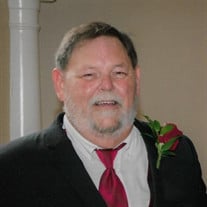 Christopher Wayne Threadgill was born in Dallas, Texas on his father’s birthday, November 26, 1956, to A.J. “Jack” and Doris Threadgill. After a lengthy illness, he went home to be with the Lord on February 4, 2022. Chris graduated from Henderson High School in 1975 and furthered his education at Kilgore College. Following college, he worked for Pritchard and Abbott before returning to full-time work at his family business, Jacson Cemetery Service. Chris was a loving family man, a Christ-follower, and a loyal friend. He was a member of First Baptist Church Henderson, but he could often be found holding “church” in the back office of his shop, sharing kindness and giving advice to his employees and friends in the funeral profession. He loved his nieces and nephews dearly and was always ready for them with a joke, a Donald Duck impression, or an eye roll. He most enjoyed sitting around the dinner table laughing and telling stories. Celebrations with family and friends were so important to him. He never missed an opportunity to sit around a table with loved ones and celebrate a birthday, Thanksgiving, or Christmas. His favorite celebration was hosting the company’s annual fish fry when all East Texas funeral directors came together for food and fellowship. Daddy spent over 50 years working hard to serve others as a member of the funeral service industry. He took his job very seriously and wanted to ensure all families were cared for in their times of need. When he could get away from the office, he enjoyed sharing his hobbies of hunting, racing, classic cars, and music with his family and friends. He was a proud member of the NRA and the Sons of the Republic of Texas. He loved his country and was proud of his family history. He was honored to serve on the Shiloh Cemetery board for many years as well as the Rusk County ESD board. Chris was preceded in death by his parents, A.J. “Jack” and Doris Threadgill, brother Andy Threadgill, sister Susan Threadgill, his infant son, his brother-in-law, David Marshall, and his father-in-law, Tim Lopez. He is survived by his loving and devoted “Darling Wife” of 43 years, Teresa Threadgill, along with his daughter, Kristen Threadgill and his son, Jackson Threadgill and wife, Michelle; his brother John Threadgill and wife Kay; mother-in-law, Maria Lopez; Carmen Marshall, Hal & Rosa Martin, Darrell & Rosario Flesher, Ramon & Belinda Lopez, and Bernice Still. He is survived by his nieces and nephews, cousins, and many more family members whom he loved dearly. He is also survived by his many loving and loyal friends. Services will be 10 am Wednesday, February 9, 2022 at First Baptist Church of Henderson under direction of Rader Funeral Home Henderson with visitation at the church on Tuesday evening from 5 - 7 pm. Pallbearers are David Griffith, Danny Irwin, Mike Young, Steve Howeth, Chris Stewart, Harold Howell, Rocky Hall, and Mike Hollie. Honorary Pallbearers are Hal Martin, Cecil West, H.T. Autrey, Darrell Flesher, Ronnie Rae, employees of Jacson Cemetery Service, and his many friends in the East Texas funeral profession. In lieu of flowers, donations may be made to Full Armor Christian Academy. P.O. BOX 2035, Henderson, TX 75653 or Wreaths Across America-TXRCMG P.O. BOX 2386, Henderson, TX 75653.

The family of Christopher Threadgill created this Life Tributes page to make it easy to share your memories.

Christopher Wayne Threadgill was born in Dallas, Texas on his...

Send flowers to the Threadgill family.