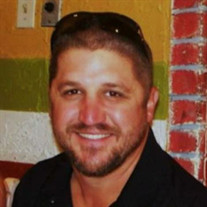 Christopher Shane Cox died unexpectedly on Tuesday August 15 in Tyler, Texas at the age of 40. A Celebration of Life will be held at 2:00 p.m. Saturday, August 19, 2017, at the First Baptist Church of Longview. Burial will follow in Lakeview Memorial Gardens under the direction of Rader Funeral Home of Longview. Visitation will be held from 6:00 to 8:00 p.m. Friday at the funeral home. Chris was preceded in death by grandfathers; Wayne Hutson, Charles Cox, Billy Ray Tarver and grandmother Eunice Cox. He is survived by his wife; Monique Cox and two children Sydney and Kipton of Mansfield TX, parents: Lola and Don Beard of Hideaway TX, Mike and Tammy Cox of Wills Point, TX; brother Ryan Cox and wife Andrea Cox and two children of Flower Mound, TX, brother in law Cody Satterwhite and wife Laura Satterwhite and daughter of Tyler, TX , step-sister Katie Adams and husband Trevor Adams of Tyler, TX.; Grandmother Elsie Marie “Reekee” Tarver of Wills Point, TX, Aunts and Uncles: John and Ti Laster of Longview, TX, Mark and Brenda Cox of Tyler, Randy and Rose Cox of Trinity, TX, Kathy and Reid Hall of Longview, TX and numerous loving cousins. Chris was born on December 16, 1976, in Longview, TX. He graduated from Longview High School in 1995. While at Longview he excelled and set records in football, basketball, and baseball. He received honor of first team all-state in baseball during his senior year. Chris continued to play baseball in college at Tyler Junior College, 1996-1997 and Northwestern State University, 1998-1999. While playing at TJC he earned a third place ranking nationally as a hitter in Junior College National Rankings. While playing baseball at NSU he helped the team earn multiple conference titles and national ranking. Chris received and Masters degree in Psychology while attending NSU. After College Chris married his high school sweetheart and love of his life Monique. He and Monique are the parents of two beautiful children Sydney Marie and Kipton Shane. Chris had a love for his family that you could see pour from him when he was interacting with them or talking about them. All he did in life he did to provide his family with a fulfillment of memories and happy times. He found his joy in life by seeing his family’s happiness. Chris was an exceptional person with a personality people were attracted to. He had a natural leadership quality that was demonstrated by example in all walks of life. Chris excelled in every aspect of his life with an ability to fix every situation that was presented to him and also have the unique ability to teach others to help them achieve their goals. Professionally and personally he was someone that you could always depend on. During his personal time he loved to play golf with friends. He looked forward every year to a trip to Palm Spring, CA with Brooks Bishop and friends. He excelled in golf and always silently wished for the chance to compete on a professional level. Chris was an avid sports fans, cheering for the Dallas Cowboys, Texas Rangers, Dallas Mavericks, and Dallas Stars and always looking for the next championship coming home to his Dallas franchises. In lieu of flowers, memorial contributions may be made to the American Cancer Society.

Christopher Shane Cox died unexpectedly on Tuesday August 15 in Tyler, Texas at the age of 40. A Celebration of Life will be held at 2:00 p.m. Saturday, August 19, 2017, at the First Baptist Church of Longview. Burial will follow in Lakeview... View Obituary & Service Information

The family of Christopher Shane Cox created this Life Tributes page to make it easy to share your memories.