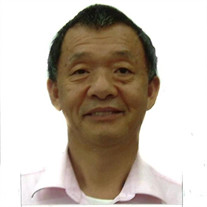 Chin Tuo Chen, born on June 18th, 1956, in Miaoli Xinzhu Taiwan. His father was Tien-wang Chen, his mother was Li Tung Chen. Chin was the youngest of 11 siblings in his family. After graduating from high school, he joined the army and was a sniper. After being discharged from the army, he became a cook. He immigrated to the United States from Taiwan in 1985 and became an American Citizen. He then opened “Chen’s Garden” Chinese Buffet in Longview. He wasn’t only a good cook, but also had a warm hospitality. Although the Chinese restaurant has been closed for a long time, many old customers still remember him and regard him as a friend. He had two daughters in his first marriage, Miki (deceased) and Cheri Chen. He married his second wife, Bijao (Lucy) Chen in 2004 and had a daughter, Jennifer Chen, and a son, Alex Chen. He had a Mexican bar “Tejas Rose” in Longview. And Chen retired early due to physical reasons at the age of 60. Chin was an optimistic person. He loved his family and children. He taught children how to swim, bike, scooter, and cook. He also liked fishing, growing vegetables, and the military. He supported his second daughter to work in the military and is proud of her service to the country. Chin was a kind person. He once saw a turtle in the middle of the road on his way home from work late at night. He stopped and put the tortoise safely near water. If he saw Baby birds that were blown off a tree, he’d put them back up into their nests. Seeing the carcasses of small animals crushed by cars on the road, he cleaned them up. In the eyes of his wife, Chin was a hard-working and honest man, a good husband, and a good father to his children. He died peacefully in his home on November 26, 2021. Now he’s in heaven, his family and friends will miss him forever. There are no public services. As per his wishes, private cremation is under the care of Rader Funeral Home in Longview.

Chin Tuo Chen, born on June 18th, 1956, in Miaoli Xinzhu Taiwan. His father was Tien-wang Chen, his mother was Li Tung Chen. Chin was the youngest of 11 siblings in his family. After graduating from high school, he joined the army and was a... View Obituary & Service Information

The family of Chin Tuo Chen created this Life Tributes page to make it easy to share your memories.

Send flowers to the Chen family.