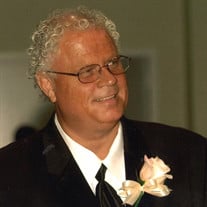 Although he sleeps, his legacy lives on in us. Charles Lee Striegler stepped into eternity peacefully on Monday, November 15, 2021, at his home in Longview, Texas. He is now free from pain, and is rejoicing in Glory, having left the struggles of this life behind. God’s Holy Word reminds us that "precious in the sight of the Lord is the death of his saints" (Psa. 116:15). Charles was a loving husband to Wanda, and dedicated father to his children, Jackie and Jeremy. Charles treasured family and delighted in his grandchildren, Savannah, Ryder and Avonlea, who loved and adored their “Peepaw.” Born on October 17, 1951, in Blanco, Texas to Victor and Sarah Striegler, Charles was raised with his sister Sharron and brother Vernon in a strong, Godly home. Charles served in the U.S. Marine Corps, where the strength and skills he acquired later served him well in management and sales. After his honorable discharge from service, Charles moved to Longview in 1974 where he met and married the love of his life, Wanda Sue Rutledge. Married in 1975, Charles and Wanda began building a life together, serving their Lord and Savior, Jesus Christ. Prayer, worship, and Charles’s commitment to Church remained central features of his walk with Christ throughout his life. Loyalty to his family and friends was superseded only by his fidelity to the cause of Christ. He enjoyed a hot cup of coffee in the twilight of morning on deer season’s opening day, hearing the beeps of his metal detector while on a treasure hunt, and picking the strings of an acoustic guitar while the grandkids were “coming around the mountain.” Among his greatest desires was to be a light on the path for others in search of Jesus. Even in the final days before his passing, Charles spoke life in to the lives of those around him. Charles is survived by his wife of 46 years, Wanda, of Longview, Texas; his daughter, Jackie Swain and husband Joshua Swain, of Longview, Texas; his son, Jeremy Striegler, of Longview, Texas; his three grandchildren, Savannah Striegler, Ryder Swain and Avonlea Swain; his sister, Sharron Faulkner, of New Braunfels, Texas; his brother, Vernon Striegler and wife, Pat, of Bastrop, Texas, and a wonderful extended family of in-laws, nephews and nieces, cousins, and friends, whom he loved like family. He is preceded in death by his parents, Victor and Sarah Striegler. Visitation will be at Rader Funeral Home in Longview, Texas, on Sunday evening, November 21, 2021, from 5:00 pm to 7:00 pm. A home-going service for Charles will be held at 12:00 pm on Tuesday, November 23, 2021, at Calvary Tabernacle, 301 E. Hawkins Pkwy. in Longview, Texas. Interment service will follow at Rosewood Park Cemetery.

Although he sleeps, his legacy lives on in us. Charles Lee Striegler stepped into eternity peacefully on Monday, November 15, 2021, at his home in Longview, Texas. He is now free from pain, and is rejoicing in Glory, having left the struggles... View Obituary & Service Information

The family of Charles Lee Striegler created this Life Tributes page to make it easy to share your memories.

Although he sleeps, his legacy lives on in us. Charles Lee Striegler...

Send flowers to the Striegler family.