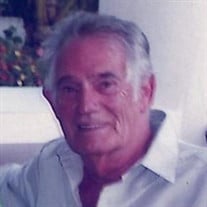 Visitation for Charles D. (Chuck) Schmitt will be held on December 4, 2021 at 2:00 p.m. at the mausoleum at Rosewood Park Cemetery followed by a service at 3:00. Burial will follow under direction of Rader Funeral Home. Chuck was born on September 11, 1938 to Charles (Chuck) and Margaret (Peggy) Schmitt in Midland, PA. and joined God and his deceased children on November 29, 2021 at the age of 83. Growing up in a small town outside of Pittsburgh he was a lifelong Steelers fan. His theory was that if they didn’t win every Super Bowl game it was simply because the refs made too many bad calls or the team had too many injuries. After graduating from Midland High School he enlisted in the Air Force, served 6 years and was honorably discharged. He was stationed in Izmir, Turkey as an air traffic controller. Later he was reassigned to base special services to play baseball and basketball in Europe and the Middle East on public relations tours. After the service Chuck spent twenty years with Colt Industries in Midland as a general foreman in the steel division. He was recruited by Lone Star Steel in 1982 which brought him and his family to Longview Texas. He worked for LSS for twenty two years as a production supervisor. Chuck married Marlee Redd on February 12, 1994 and they enjoyed spending time together, country western dancing, golfing and traveling. They traveled to different states often visiting his children or wherever she had speaking engagements. They were members of a resort in Cozumel and spent 30 weeks vacationing there over a 15 year period, most favorite times with a daughter, sons or other family members. When Chuck retired he invited his five sons and his only brother and nephew to Cozumel where they had a fun-filled vacation to celebrate. After Marlee retired they took three European cruises and visited numerous cities in Amsterdam, France, Germany, Italy, Greece and Turkey, many where Chuck had been stationed in the Mediterranean. They also cruised to Hawaii, visited all the islands and were deeply touched by Pearl Harbor. Chuck was preceded in death by his parents “Chuck” and “Peggy” of Longview, daughter Ann Slappy; son, Karl Schmitt; brother Art Schmitt and Marlee’s children David Redd, Laura Nicholson and unborn grandson Ryan Nicholson. He is survived by his wife Marlee of almost 28 years: sons, Charley (Susan), Johnny (Alicia), David (Jan West), Christopher, daughter, Jennifer Aguilar (Rodney), sons-in-law Andy Nicholson, Donald Slappy and daughter-in-law Ashley Schmitt. Also surviving are grandchildren: Rachelle Whiteleather (Toni), Kelsey Baker (Jared), Zach Hern, Rachael Slappy, Natalie, Danielle, Nicole, Caitlin, Tommy, Jake, Julia, Hailey and Hannah Schmitt, Derrick Lopez and Mason Nicholson: great grandchildren; Gabriel and Santana Whiteleather, Noah and Liam Baker and Grace and Jordan Lopez; sisters Mirian Loftis, Melissa Stuart (Dick) and Tina Escher (Ray) plus many nieces, nephews and friends. Pallbearers will be his sons, son-in-law (Rodney Aguilar) and grandsons Jake Schmitt and Zake Hern. If so desired flowers or donations in his name may be made to Tunnels to Towers, Wounded Warriors or St. Jude Hospital.

Visitation for Charles D. (Chuck) Schmitt will be held on December 4, 2021 at 2:00 p.m. at the mausoleum at Rosewood Park Cemetery followed by a service at 3:00. Burial will follow under direction of Rader Funeral Home. Chuck was born on September... View Obituary & Service Information

The family of Charles Daniel "Chuck" Schmitt created this Life Tributes page to make it easy to share your memories.

Visitation for Charles D. (Chuck) Schmitt will be held on December...

Send flowers to the Schmitt family.