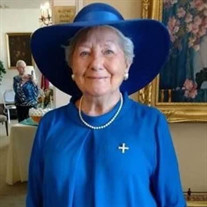 Carol Dee Baker Meyer. Born May 18, 1937 in Belleville Michigan. Died August 25, 2021 in Longview Texas. Service of remembrance will be held at 1 PM central time Monday, August 30th at Trinity Episcopal Church Marshall Texas. Carol Dee grew up on Belleville Lake and graduated from Belleville High School in 1955. She met Robert in a dance hall and it took eight months before she would dance with him. They married in December 1956. From this union came two sons and one daughter – James, Kurt, and Erika. Her years were spent running kids from sporting event to sporting event. In 1981 the family moved to Texas. She was involved in many various clubs and activities including Longview Women’s Forum, Newcomers Club, Book Club, Chamber of Commerce, Longview Art Museum, and Daughter’s of the King, just to name a few. In 1999 she graduated from Kilgore College with a PTA degree and spent many enjoyable days working in various nursing homes around town. After her retirement, her passion was Christ. She spent many hours volunteering at church, on the Vestry Board, House of Disciples, and Daughter’s of the King conferences. She enjoyed spending time with family and friends, traveling abroad and to see her granddaughters. She also spent her time, money, and energy on the Republican Party, being heavily involved in politics. She was a friend to all and knew no strangers. A strong woman who had an unshakable faith in Christ. She was a comfort in time of need, and will be sadly missed. Carol is survived by her three children. James and Kurt Meyer of Somerset, Kentucky and Erika (Kevin) Pagel of Hettinger, North Dakota. Four granddaughters Emily (John) New, Carly Meyer, Jaime Kay Meyer, and Alisha (JaDean) Anderson. One grandson, Blaine Pagel. Five great granddaughters, Journey Rae Meyer, Elizabeth Pagel, Alivia Anderson, Ainsley Anderson, and Eve Anderson and numerous nieces and nephews. She was preceded in death by her parents, John and Agnes, and her husband, Robert. A memorial has been established for House of Disciples, Longview Texas. The service will be live streamed on the Trinity Episcopal church, Marshall Facebook page.

The family of Carol Dee Meyer created this Life Tributes page to make it easy to share your memories.

Send flowers to the Meyer family.