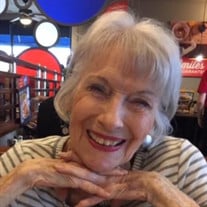 The Life of Bonnie Ruth Lewis Moberley Hatchell Bonnie was born February 3, 1919, to Henry Herbert and Dollie Mae Lewis in Cass County Texas. She passed away in her sleep on April 8, 2022. Bonnie’s 103-year life was at times tumultuous and at times so much fun that you couldn’t believe it was lived by only one person. After farm life did not yield enough money for the family, Bonnie moved with her parents to west Texas following the oil. Every new field discovered meant more jobs available. But In 1932 she came to the home she loved, Longview. Here, she finished high school in 1936 and attended the University of Texas. She was also in attendance at the 1937 Longview Lobo state championship game and watched the 2018 team on television, no doubt making her the only Longviewite to have seen both in her lifetime. In 1938 she met, fell in love, and married Jack Moberley, a young oil seeker himself from Illinois. With Jack working for the Gregg Tex Oil Company, Bonnie opened and operated Moberley’s Book Store and Record Shop until she sold it to raise her family, Gary Stephen and Janet Kaye. In 1956 the first tragedy struck with Jack’s death. Needing to raise two children, she returned to the work field she loved, music For 20 years she worked as office manager and buyer for the record department of Tatum Music Co. Children grown, in 1973 she married Raymond Newton Hatchell, and they spent 30 fun-filled years until his death in 2003. While married to Raymond, she finished her work career at International Supply and retired at 62 to “smell the flowers” – and smell them she did! Bonnie loved the 17 years spent volunteering at Longview Regional Hospital. She was a 35-year member and teacher of The Dorcas Bible Club and The High Hopes Garden Club. She was also a member of Pine Crest Country Club where she loved to play golf, dance, and play bridge. In fact, playing bridge was a life-long pursuit – a game she learned from Jack and played until the very last weeks of her life. She was also a West Rotary Paul Harris Fellow. But, Bonnie’s major love was her church, First Methodist, where she was a member for 70 years. She taught in the children’s department then joined the Thelma Morgan class where she also taught. She chaired The Society of Stephens and was a staunch supporter of New Gate Mission and Ashbury House. Bonnie always said, “My church has been the bulwark of my life. I was married in it, christened my children it, and buried my loved ones in it. I sit within it’s walls and draw my strength to live my life. “ Bonnie was the epitome of the steel magnolia, a beautiful, fun soul who brightened every meeting or party but who shone over the tragedies she had to bear with a sense of bravery and grit. One would never know from her how badly things might be going whether it be the loss of a husband, raising two children alone, caring for two disabled parents and ultimately, the crippling loss of her beloved son Gary, who died in 1993. The night before Bonnie died, she was watching golf and choosing her favorites for the Masters while switching back and forth to hear all about the new Texas Rangers team. It will not be the same without her running sports commentary on Facebook. One of the last things she said was, “This is my time of year. Golf, baseball, and oh, I wish I could have an ice cold beer right about now!” The next day Bonnie was too sick to open her eyes and communicate, but these few vignettes say it all. She lived life to the very end with bravery and pizzazz. What an attitude! Bonnie is survived by her daughter Jan Moberley of Dallas. She wished to thank those who gave her such good care at Arborhouse of Garland, especially Beatrice, her caregiver extraordinaire and friends who brought her great joy and welcome competitive endeavors in recent times when she was less able to get out and about. Please make memorials to First United Methodist Church of Longview, Regard 4 Life Animal Rescue in honor of Priscilla, or Buckner Children’s Home of Dallas in honor of Gary Moberley. Visitation is Monday, April 11, 2022 at Rader Funeral Home from 4:00 – 5:30 p.m. Services are at First United Methodist Church, Downtown Longview at 2:00 p.m. Tuesday, April 12. Graveside services follow.

The Life of Bonnie Ruth Lewis Moberley Hatchell Bonnie was born February 3, 1919, to Henry Herbert and Dollie Mae Lewis in Cass County Texas. She passed away in her sleep on April 8, 2022. Bonnie&#8217;s 103-year life was at times tumultuous... View Obituary & Service Information

The family of Bonnie Ruth Hatchell created this Life Tributes page to make it easy to share your memories.

Send flowers to the Hatchell family.