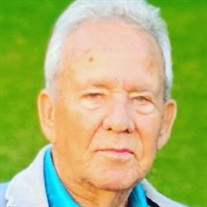 Bobby Ray Elder was born August 14, 1934 in Watonga, Oklahoma to Loyal and Viola Elder. He passed away February 26, 2022 in Longview, Texas. Bob was a loving father of seven children and husband of 65 years to Margie Betts Elder. Bob was a devoted Christian and member of Post Oak Road church of Christ in Kilgore. He enjoyed the outdoors and fishing, but his most cherished moments were spending time with his family which often included conversations around the dinner table and spoiling his grandchildren. Bob is survived by his wife Margie Elder, his children, Bill Elder and wife Laura of Robert Lee, Rick Elder and wife Jill of Longview, Barry Elder of Hudson Oaks, Mark Elder and wife Vickie of Bella Vista, AR, Brad Elder of Lubbock and Brandon and wife Venus of Peaster. His grandchildren, Ashton Roberts, Cody Elder, Shelby Holcomb, Haley Reyes, Georgia Elder, Lauren Elder, Jake Elder, and Hayden Elder and his three great grandchildren, Levi Elder, Beckett and Finley Roberts. He is also survived by his brother, Richard Elder of Neosho, MO., and sisters, Beverly Norton of Georgia, and Bonnie Piquette of Los Angeles. Bob was preceded in death by his daughter, Teresa Barnhart of Odessa, Tx, sisters Doris Silva of San Francisco and Barbara Pennel of Granby, MO. He enjoyed attending church and looked forward to seeing his Christian family each week. He had a positive influence on many in his life and his smile and sense of humor will truly be missed. We can be comforted in his passing knowing he has gone on to heaven to be with his daughter, Teresa, where they will be in eternal bliss in God’s Heavenly Kingdom. Memorial Service will be held on Saturday March 5, 2022 at 11:00am at: Post Oak Road Church of Christ 131 Post Oak Rd Kilgore, Tx 75662. If anyone would like to donate flowers requests have been made for live plants. In lieu of flowers, donations can be made to ALINEA Hospice at: Alinea Hospice 303 E. College St. STE. C Terrell, TX 75160

Bobby Ray Elder was born August 14, 1934 in Watonga, Oklahoma to Loyal and Viola Elder. He passed away February 26, 2022 in Longview, Texas. Bob was a loving father of seven children and husband of 65 years to Margie Betts Elder. Bob was a devoted... View Obituary & Service Information

The family of Bob Elder created this Life Tributes page to make it easy to share your memories.

Send flowers to the Elder family.