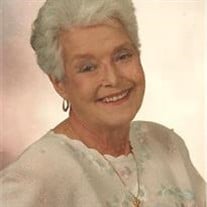 Born April 18, 1933 in Marshall Texas to Ira and Bernice Wood, Billie died June 1stafter a long and courageous struggle with cancer and other related illnesses. Billie married her life-long love, husband Joseph S. Crenshaw Jr. February 16, 1952 at the First Christian Church in Marshall, Texas and began their life together in Fort Hood, Texas where Joe served in the U.S. Army after surviving combat in the Korean War. They made homes with their children in Marshall, Texarkana, and Longview Texas. Billie was an active member of many organizations including the Auxiliaries of the Disabled American Veterans and Veterans Of Foreign Wars, the PTA of Eylau school, Liberty Eylau band boosters as well as being a Den mother with the Cub Scouts of America. She passionately supported Veterans causes such as the U.S.O., the Help Hospitalized Veterans Inc., and the Wounded Warrior program. She partnered with her husband Joe in the planning of many patriotic and veteran's programs and endeavors. Billie is survived by her husband of 61 years, Joe Crenshaw. She voiced that what gave her the most joy in life was her family. She is survived by her four children: Joseph Daniel Crenshaw, Gerald W. Crenshaw, and his wife Lexie, Donald M. Crenshaw and his wife Kathy and her only daughter, Patricia G. Crenshaw. She was adoringly called Nannie by eight grandchildren: Angela Hudson with Rick Garrett, Joseph D. Hudson, Gerald W. Crenshaw Jr., and his wife Lindsay, Kasey McKee and her husband Daley, Andrew "Scott" Hudson, and his wife Samantha, Carolyn Barnard and her husband Aaron, who proudly serves in the U.S. Navy, Logan Crenshaw, Bryson Crenshaw, and Ashdon Crenshaw. She was called Grand-Nannie by her great-grandchildren Taylor Hallick, Elijah Hudson, Bryce Barnard, and Abigail Hudson. Billie's only living sister is Ms. Jamie Morris and family of Mesquite, Texas. Visitation will be held at Radar Funeral Home of Longview, Wednesday June 5th 6:00-8:00 p.m. Services will be held Thursday June 6th in the Rosewood Park Mausoleum at 10:00 a.m. The service will be conducted by Dr. Scot Crenshaw: Billie's nephew who teaches religion and philosophy at Harding University in Searcy, Arkansas. If desired, donations may be made to Veterans of Foreign Wars Post 4002 at 401 Ambassador Row Longview, Texas 75604.

The family of Billie Carolyn Crenshaw created this Life Tributes page to make it easy to share your memories.

Send flowers to the Crenshaw family.