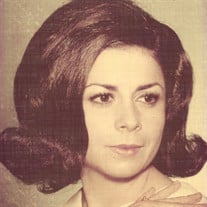 Betty Jean Skinner, 73, of Longview, Texas passed away at her home on April 9, 2019. Betty was born in Nacogdoches, TX on May 22, 1945 to parents, Walter Domingo Sanchez and Laney Sanchez. She was a graduate of Nacogdoches High School where she met her long-time friends Julia and James Johnson as well Shirley Madden. To her friends she wanted to say “Bless your heart, you have been there for me since Junior High. Love, Betty.” Betty was a hard worker and loved her kids. She always made sure they had the best. She was extremely loving to her niece and nephews. She would have them in for a week in the summer and always had everyone to her home at Christmas and 4th of July. She loved getting everyone together but this didn’t come without the expectation of what seemed to be a thousand questions or her advice that she would offer up. “Have you found a girlfriend/boyfriend? Isn’t too cold there? No one needs to live that far away!!!” And the food she would make was meant for an army when we would gather. Betty was married to her husband Jerry Skinner for 44 Years. She worked for 7-11 when she first moved to Longview, and Skinner’s Grocery Store, but most importantly was her long career as a domestic engineer. Their pastime included traveling coast to coast but they often found themselves at home in Branson, Missouri. Their favorite outings were to eat and the movies. Jerry was her bud and she was his. Her grandchildren were the love of her life and she enjoyed family gatherings with them. She always said that she wanted to live until her grandchildren were married with children but God had other plans for her. Betty is survived by her husband Jerry Skinner; daughters Deanna Guarisco and husband, Robert; Kim Alexander and husband, Chris; Vicki Shook and husband, Jeff; grandchildren Haley Guarisco, Joshua Guarisco, Luke Guarisco, Mason Alexander, Reese Alexander, Riley Shook, Summer Shook, and Mary Shook; brothers James Sanchez and wife, Charlene, Robert Sanchez and wife, Jamie, and Walter (Cookie) Sanchez; several nephews Jeremy Sanchez, David Sanchez, Michael Sanchez, John Sanchez, Steven Sanchez, James (Bubba) Sanchez, Tony Sanchez; and niece Ashley Skates; uncles Ray Arriola and wife, Kara, Frank Arriola, and Bobby Arriola and wife, Sherry. Betty is proceeded in death by her parents Walter and Laney Sanchez; grandparents Tony and Mary Arriola, Jim and Polly Sanchez, as well as several relatives including Larry Arriola, Marie Emerson, John Ynfante, Otis and Ophila Head, and Charles Sanchez. A memorial service for Betty will be held at 1 PM Saturday, April 20, 2019 at Rosewood Park Mausoleum Chapel with Bro. James Johnson officiating. Services are under the direction of Rader Funeral Home of Longview. The family would like to extend a special thanks to HeartsWay Hospice for their loving care and attention. A memorial guestbook may be signed online at www.raderfh.com.

Betty Jean Skinner, 73, of Longview, Texas passed away at her home on April 9, 2019. Betty was born in Nacogdoches, TX on May 22, 1945 to parents, Walter Domingo Sanchez and Laney Sanchez. She was a graduate of Nacogdoches High School where... View Obituary & Service Information

The family of Betty Jean Skinner created this Life Tributes page to make it easy to share your memories.

Betty Jean Skinner, 73, of Longview, Texas passed away at her...

Send flowers to the Skinner family.