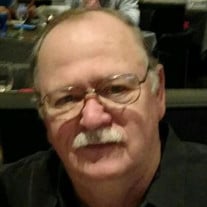 Barry Joseph Green, 73, died Tuesday, April 20, 2021, at his home in Longview, following an extended illness. Barry was born in Jeanerette Louisiana, the son of William E. Green and Louella Gary, but grew up in Nacogdoches and was a long-time resident of Beaumont, before retiring to Longview. He was an Eagle Scout and a proud veteran of the US Navy, serving on the USS Hornet during the Vietnam War. He was also aboard the Hornet when it picked up the Apollo 11 and 12 command modules. Barry was an entrepreneur and man of many talents. He was a Nacogdoches police officer, brick mason, managed a security company, served as the business agent of the Stagehand Local 183, and owned a dive shop, Aquaventures. He also loved traveling with his wife, hunting with his friends in Alaska and his brother in Louisiana. Known for his sense of humor and quick wit, he never met a stranger and could strike up a conversation with anyone, anywhere, anytime. He enjoyed many hours at the poker tables in Vegas, scuba diving in Cuba and Cozumel and socializing by the pool with his wife and best friends, Frank and Cathy Barber in Okeechobee, Florida. However, there was nothing he enjoyed more than spending time with his grandchildren, especially Pop’s boy, Beaux. He is survived by his devoted wife of 40 years, Claudie Green of Longview; two daughters, Stacey Brownlee and her husband Kevin of Longview and Laura Lee Green of Columbus, Ohio; four grandchildren, Kaelan McGuire of Houston, Colton Brownlee of Pearl Harbor, Hawaii, Beaux and Sloane Brownlee of Longview; and his brother, David Green of Winnsboro, Louisiana. He is preceded in death by his parents, Louella and Horace McCall of Nacogdoches and William E. Green; his parents-in-law, Ray and Earnestine LaGrappe; his sister, Carolyn Green McGuire and his brother, William Green. Services will be held on Monday, April 26, 2021 in the Chapel of Rader Funeral Home at ten a.m. Burial will follow at Zavalla Cemetery in Zavalla, Texas. The family will receive friends at the funeral home on Sunday from 4 to 6 p.m.

Barry Joseph Green, 73, died Tuesday, April 20, 2021, at his home in Longview, following an extended illness. Barry was born in Jeanerette Louisiana, the son of William E. Green and Louella Gary, but grew up in Nacogdoches and was a long-time... View Obituary & Service Information

The family of Barry Joseph Green created this Life Tributes page to make it easy to share your memories.

Send flowers to the Green family.