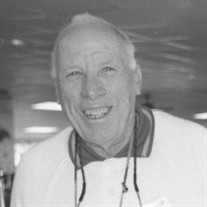 Bailey Mellersh Salmon, Jr. was born on October 31, 1925, in El Dorado, Arkansas. He passed away on July 31, 2021, at Longview Regional Hospital following a brief illness. In his last days, Bailey was aware that he was soon to pass, and he took the opportunity to express his love and appreciation to family and friends that stood by his side as his illness took its final course. Bailey graduated from Longview High School in 1943 and quickly joined the U.S. Marines. He served in the Pacific, stationed primarily in Guam. He was preparing to board ship for the invasion of Japan when the war ended. Following his service, he attended Kilgore College and then the University of Texas on the G.I. Bill. While at UT in 1950, Bailey married Grace Arden Lillja. They had two sons, Jimmy and Henry. Among the favorite memories of the children are the family vacations to attend Texas Longhorn football games. Bailey and Grace enjoyed 42 years together before her passing. In 1993, Bailey married Nancy Hansen Wittig. Nancy brought him much love and devotion, and they treasured their time together. Nancy also brought her family into the union, with Bailey having an instant affection for them, which they returned. Bailey ran an Exxon service station for 43 years, making friends with many customers. He later worked at Bar-K Ranch Store until failing eyesight stopped his work at age 89. Bailey was an avid golfer with many fond memories of his old foursome and Pinecrest Country Club. As hard as he tried, he remained a high handicapper, but no one ever enjoyed the game more. He served as President of the East Texas Oilmen's Association, President of the Texas Exes, and was a Longview Symphony Board Member. Bailey was a multi-generational Presbyterian. He served as Deacon and Elder at Longview First Presbyterian Church and later was a member of the Longview Evangelical Presbyterian Church. He attended Saint Andrew Presbyterian Church for a brief period, where he was a charter member and Deacon. He had a deep affection for his Cursillo men's group. He was preceded in death by his parents, Bailey M. Salmon, Sr. and Louise Salmon, wife Grace Arden Salmon, brother Richard Louis Salmon, daughter-in-law Carol Wittig, and grandchildren Andrew and Cherie Wittig. Bailey is survived by his wife, Nancy, sons Jimmy (Jo) and Henry (Jo), grandchildren Nathan (Carrie), all of Longview and Caroline Germany (Benjamin) of Dallas, and five great-children, Madalynn, Molly, Thomas, Catherine, and Libby. He is also survived by the beloved children which Nancy brought to the family: Mark Wittig (Dianna) of Gladewater, Robert Wittig (Josefina) of Brownwood, and Danny Wittig of Tyler, grandchildren Matthew (Lindsey) Wittig of Mineola, Tricia Moore-Miller (Jeff) of Garland, Ryan and Navi Wittig of Brownwood, Aimee and Sherlyn Hogae, and four great-grandchildren, Cash, Lydia, Madeline, and Wyatt. Funeral Services will be held at the Longview Evangelical Presbyterian Church on Saturday, August 7, at 2:00 pm. In lieu of flowers, the family asks for donations to Bailey's favorite charity: St. Jude Children's Research Hospital, 262 Danny Thomas Place, Memphis, TN 38105-3678.

Bailey Mellersh Salmon, Jr. was born on October 31, 1925, in El Dorado, Arkansas. He passed away on July 31, 2021, at Longview Regional Hospital following a brief illness. In his last days, Bailey was aware that he was soon to pass, and he... View Obituary & Service Information

The family of Bailey Mellersh Salmon Jr. created this Life Tributes page to make it easy to share your memories.

Send flowers to the Salmon family.