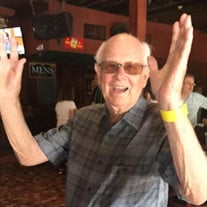 Austin Lary Brown, beloved father, Grandaddy, and brother, died March 10, 2022, in Longview, Texas, at the age of 88. Austin was born in Henderson, Texas, on May 7, 1933. Austin married the love of his life Dolores Hart on December 1, 1953, and he continued to be devoted to her even after her passing in 1995. Austin is received in heaven by his wife Dolores Brown, his father Charles Brown, his mother and stepfather Emma Pearl and Douglas Wylie, his sister Charline Shattuck, and his brother Charles Brown, Jr. Austin is survived by his sister Jane Nicholson and his younger brother Sidney Brown and his wife Sue. Austin is also survived by his three children Lane Brown, Tommy Brown, and Tammy Brown Goolsby; eight grandchildren: Whitney Boyd Reardon and husband Texas Reardon, Trey Boyd, Tara Goolsby, Michael Goolsby, Logan Brown, Jessica Terry, Allyson Brown, and Vanessa Arp; 11 great-grandchildren, and numerous nieces and nephews. Austin passed peacefully after a short illness. Austin served in the United States Army and then enjoyed working as an operator and maintenance technician at Texas Eastman for 33 years. Though he retired in 1989, he still enjoyed seeing coworkers and friends he met during his time there. In his free time, Austin enjoyed traveling to Colorado and Alaska with his wife Dolores, watching his grandchildren and great-grandchildren participate in their individual sports and dance activities, and playing poker at the boats or with friends. An avid sports fan, Austin enjoyed watching the Dallas Cowboys, Texas Longhorns, and Tulane Green Wave. Austin lived on Lake Cherokee for 34 years and loved the outdoors and the activities the space and water brought him. Austin was kind, good-humored, and well-respected. His grin and (sometimes goofy) jokes brought smiles to all who met him. He was “Grandaddy” to many he had no relation to and never met a stranger. A humble servant to his family, Austin did everything he could for those he loved. His hardworking mindset will continue to be a standard to strive towards, and his steadfast devotion to his family and friends will live in the hearts of many. The family would like to thank the nurses and hospital staff at Christus Good Shepard Medical Center for their compassion and care in serving Austin for his short time in the hospital. Service for Austin Lary Brown will be March 21, 2022, 12:00 p.m., at Rader Funeral Home, followed by a graveside service at Rosewood Cemetery. There will be a visitation and viewing preceding the service at Rader Funeral Home at 11:00 a.m. In lieu of flowers, the family asks for donations to be made to the American Kidney Fund.

The family of Austin L. Brown created this Life Tributes page to make it easy to share your memories.

Send flowers to the Brown family.