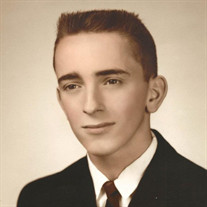 Arthur “Dale” Stiles passed away Monday, January 10, 2022 after a brief illness. He was 76 years old and was a longtime resident of Longview, TX. The tenth child of Henry Clarence Stiles and Jennie Violetta Kinter Stiles, Dale was born on August 27, 1945 at home in Belsano, Pennsylvania. He grew up in Strongstown, Pennsylvania. He graduated from United Joint High School in Armagh, PA in 1963. Following high school, Dale joined the US Marine Corp and served in the Marines from 1966-1968. After training in Parris Island, South Carolina, he was stationed in Geiger, North Carolina and, finally, El Toro, California. Dale was proud of his military service. After his time in the Marines, Dale worked in the construction industry. He was an ironworker, a welder, a crane operator, and a foreman. Most recently, he enjoyed being self-employed as a steel fabricator. Dale never officially retired, though he did find time for fishing, camping, and ATV adventures in Colorado. He is survived by partner Betty Stiles of Longview, TX, son and daughter-in-law Alan and Bridget Stiles of Longview, Texas, daughter Shaun Stiles Loftis of Austin, Texas and grandson, Konnor Loftis of Austin, TX. He is also survived by sisters Ellen Clark of Loraine, Ohio and Mildred Justice of Rockcreek, Ohio as well as many nieces and nephews. He is preceded in death by his parents, brothers Harry and Jim, and sisters Leona, Jesse, Dorothy, Charlotte, and Alice. Dale will be deeply missed by family and friends near and far. The family will have a private celebration of life for family and close friends. For info email Shaun at [email protected]

Arthur &#8220;Dale&#8221; Stiles passed away Monday, January 10, 2022 after a brief illness. He was 76 years old and was a longtime resident of Longview, TX. The tenth child of Henry Clarence Stiles and Jennie Violetta Kinter Stiles, Dale was... View Obituary & Service Information

The family of Arthur "Dale" Stiles created this Life Tributes page to make it easy to share your memories.

Send flowers to the Stiles family.