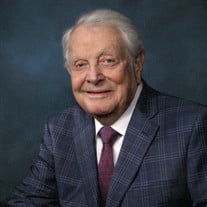 Art Machin of Longview, Texas, passed away on April 25, 2022, at the age of 92. The son of Clara Bourne Machin and James Frank Machin, Art was born in New Orleans, Louisiana, on December 21, 1929. Art was an outstanding athlete and excelled in football, boxing, baseball, basketball, and track at the Gulf Coast Military Academy in Biloxi, MS, prior to playing football as a freshman at Louisiana State University. Art loved the LSU Tigers, and his wardrobe sported many items of purple and gold. The college football National Championship in 2020 was an especially satisfying victory for the Purple and Gold. He loved to tell stories and could entertain friends and family for hours with tales of golf, travel, and skiing the slopes of Crested Butte, CO. In fact, Art and his family often spent summers in Colorado or other vacation spots that were always filled with food and fun. Following graduation from LSU with a degree in Petroleum Engineering in 1953, Art began his career with Cities Service Oil Co in Texas/Louisiana/Oklahoma from 1953-1958. He then worked for Trice Production Company until 1962 when he ventured into the independent oil world by establishing Art Machin & Associates, later changed to Machin & Associates as his sons joined him in the business. On a professional level, Art was a member of a number of engineering organizations such as the National Society of Professional Engineers, Society of Petroleum Engineers; Texas Mid-Continent Oil & Gas Association; American Petroleum Institute-East Texas Chapter; and the Texas Independent Producers and Royalty Owners Association (TIPRO). Art’s illustrious career in the East Texas oil industry was ultimately remembered with the dedication of a derrick in downtown Kilgore by the Kilgore Historical Preservation Foundation. The term ‘golf vacation’ may have originated with Art, who traveled to numerous golf courses to play on such hallowed grounds as Turnberry and Saint Andrews in Scotland, to Pebble Beach in California, and all points in between. A lover of all-things-golf, Art played golf actively until just a few years ago, always competing with himself to improve his game. For many years, Monday nights found Art and wife Patsy at the Cherokee Club with friends, talking golf, politics and even religion, despite sometimes being advised to stay away from such topics. He was a past director of the Longview Chamber of Commerce and member of Pine Crest Country Club; Royal Oaks CC in Dallas; as well as the Cherokee Club and the Petroleum Club of Shreveport, LA. Art especially enjoyed his family and their annual Christmas/Birthday celebration made for a gala treat for the family. Watching his family opening gifts was a big part of those special times. He is survived by his wife of 47 years, Patsy Howell Machin, along with his three children, whose mother is Clara Machin: Art “Arty” Machin, Jr. of Longview; daughter Patti Garrett (Gary) of Decatur, GA; and son Tommy Machin, also of Longview. His nine grandchildren include Jeff, Scott, Seth and Payton (Arty); Layne, Bryan and Kyle (Patti); and Taylor and Logan (Tommy). Great-grandchildren include Patricia, Emily, Roland (Jeff); Annie, Gracie (Scott); Jtimothy (Seth); Novella (Layne); Reed, Kai, Ani (Bryan); Lucia, Ezra (Kyle); Anthony (Logan) and Clara (Payton). Art will also be remembered by his numerous nieces, nephews, extended family and friends. He was a long-time member of Trinity Episcopal Church in Longview. The family would also like to personally thank Drs. C. R. Earnest, Larry Frase; the staff at LifeCare Hospice and StayKare Solutions and their wonderful aides. In lieu of flowers, the family requests donations be made to the Discretionary Fund of Trinity Episcopal Church in Longview or First Tee Piney Woods (firstteepineywoods.org). Family friends are invited to fellowship and visitation in the Chapel of Rader Funeral Home of Longview on Thursday, April 28, from 4 to 6 pm. A private memorial service is planned later for the family.

Art Machin of Longview, Texas, passed away on April 25, 2022, at the age of 92. The son of Clara Bourne Machin and James Frank Machin, Art was born in New Orleans, Louisiana, on December 21, 1929. Art was an outstanding athlete and excelled... View Obituary & Service Information

The family of Arthur "Art" R. Machin created this Life Tributes page to make it easy to share your memories.

Send flowers to the Machin family.